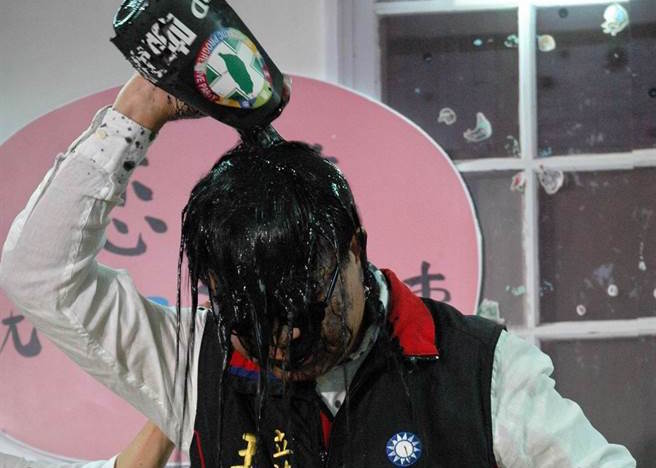 On January 16, Taiwan will elect a new president and legislature. While current polls indicate that the opposition Democratic Progressive Party is in the lead, the ruling Kuomingtang will undoubtedly not give up without a fight. But before all the solemnity and consequences of electing a new president sets in, let’s take a look at some of the most outlandish things that have happened during the campaign period in Taiwan during the past few months.

Independent Chiayi legislative candidate Huang Hong-cheng (黃宏成) put on quite a showy display dressed up as Caishen, the Chinese god of prosperity, at a nationally televised event for Legislative Yuan candidates to state their policies. During his allocated 12-minute slot, Huang sings and dances to Chinese New Year songs, ~gobbles~ down Chiayi’s famous turkey rice and throws fake money, amongst other entertaining yet baffling actions. Caishen could not be reached for comment. Please do, however, applaud the sign-language interpreter for his professionalism.

And the award for the best use of green screen goes to… The New Party, who have managed to not only hire really enthusiastic actors who appear to have the ability to levitate but also a true professional to shoot and edit its new promotional video using Paint and Windows Movie Maker. It’s so bad it’s good.

Independent Taoyuan City Council candidate You Liang-fu (游良福) was so nervous about his speech outlining his policies he had to drink some booze to steel himself, which he readily admitted in his inebriated state on national television. Liang then proceeds to talk in detail about his personal life and expresses his desire to engage in sexual intercourse with “beautiful ladies on the street”. Our sympathies are again with the sign-language interpreter as she tries to keep a straight face.

In response to recent tainted food scandals in Taiwan, KMT legislative candidate Shen Chin-hwei (沈智慧) has proposed to strict punishment of life sentences and death penalties for manufacturers who endanger food safety. For added effect (and irony), she chokes on milk from Ting Hsin International Group, the company infamously embroiled in the food scandals, while talking about these policies in a staged blooper clip that was eventually included in the video.

5. Legislative Candidate Pours Ink On Self To Illustrate Resolve Against Smear Campaigns

In the final week leading up to the election, the KMT’s Pingtung County Legislative candidate Wang Jin-Shih (王進士) poured a cup of ink over his face at a press conference to demonstrate his resolve against smear campaigns by his DPP opponent. After pouring ink over himself twice, Wang said he was not afraid of the opposition’s attempts at discrediting and defaming him through shady acts. Talk about illustrating a point, literally.

It appears now a politician also has to be capable of performing circus acts in order to be elected. Another candidate determined to demonstrate his resolve, the KMT’s New Taipei Legislative candidate Chen Mao-jia (陳茂嘉) dove through a fire hoop while visiting his junior high school in New Taipei’s Xinzhuang District. Chen says his act symbolizes him rising from the ashes.

7.  The Force Is Strong With New Party’s Official Promotional Video

We’ve gotta hand it to the New Party; it kind of figured out how to use green screen after the kerfuffle with its previous promo video. In a clear reference (or should we say rip off?) of Star Wars, New Party politicians are seen with yellow lightsabers, which several YouTube users have pointed out look like bananas, ready to protect justice in Taiwan.

Great article. It shows the lunacy in the part of the Chinese society with freedom.

Number 3 says the video was posted in 2014, so not the 2016 elections. But hilarious nonetheless.