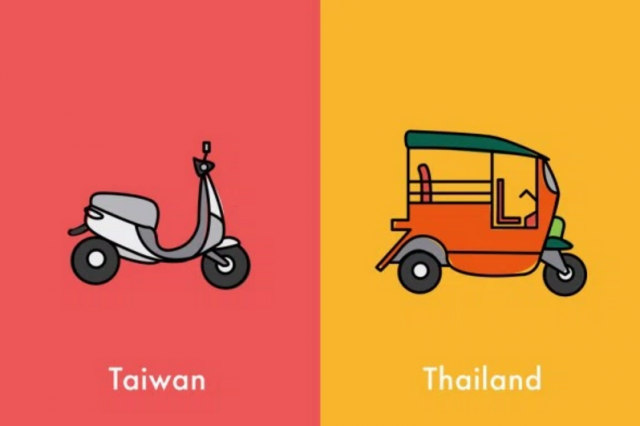 Due to the similar pronunciations of “Taiwan” and “Thailand”, the two countries have been a point of confusion for many. To help clarify the difference between the two Asian countries, the designers at EXP have drawn up ten infographics illustrate the contrast between the two cultures. What do you think? 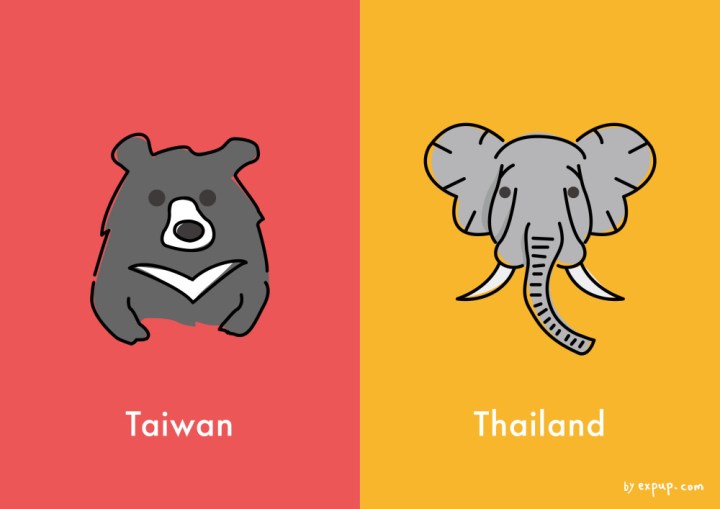 Taiwan’s national animal is the Formosan black berar, while the elephant represents Thailand and is a symbol of pride. 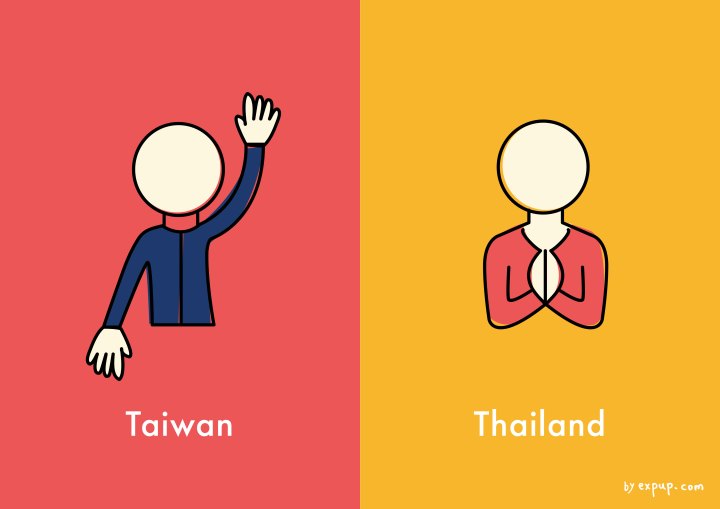 People in Taiwan say “hi” while waving their hands. People in Thailand say ”sawadeeka” while putting their palms together and then bowing. 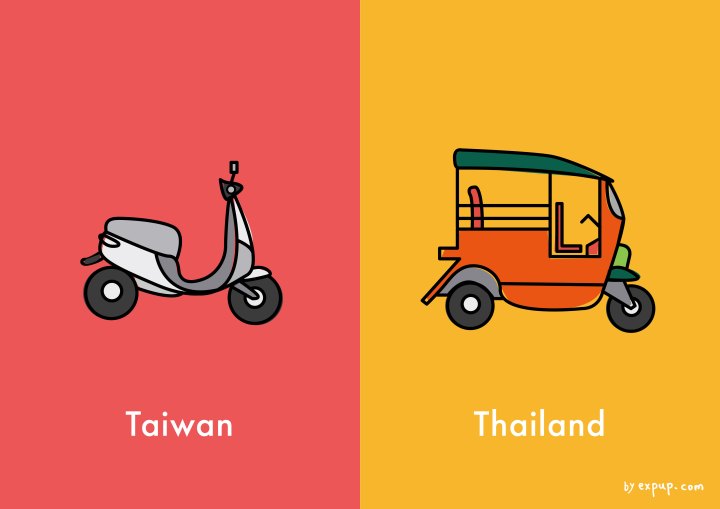 People in Taiwan ride scooters, while people in Thailand take the Tuk-tuk. 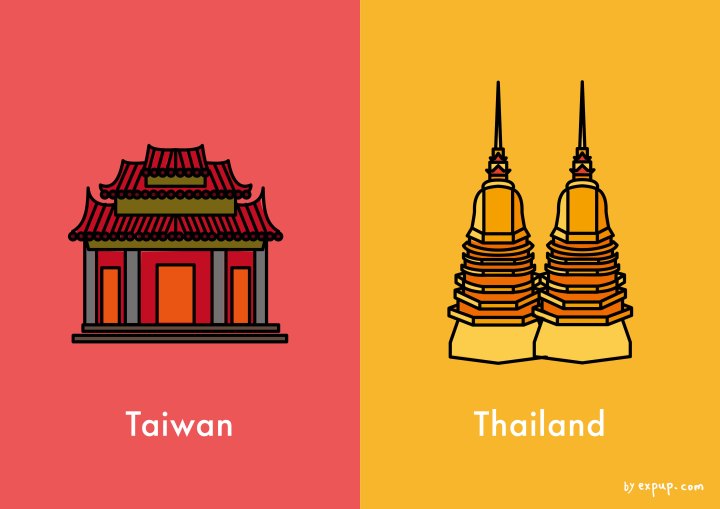 Most traditional temples in Taiwan have a flat-topped roof. Temples in Thailand have a steeple. 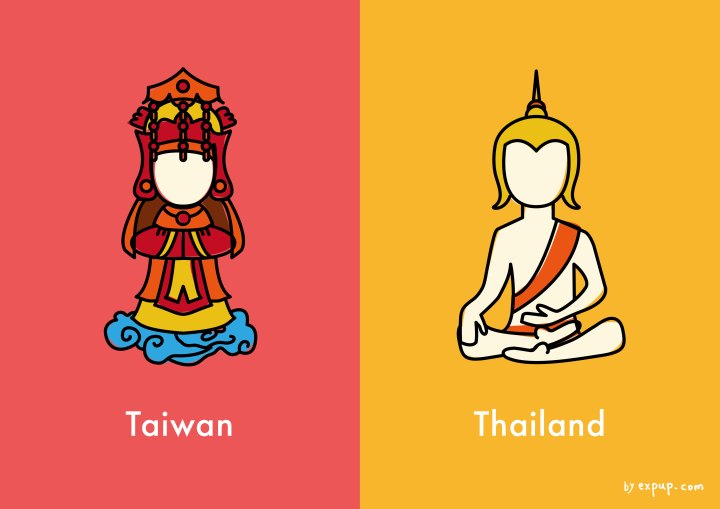 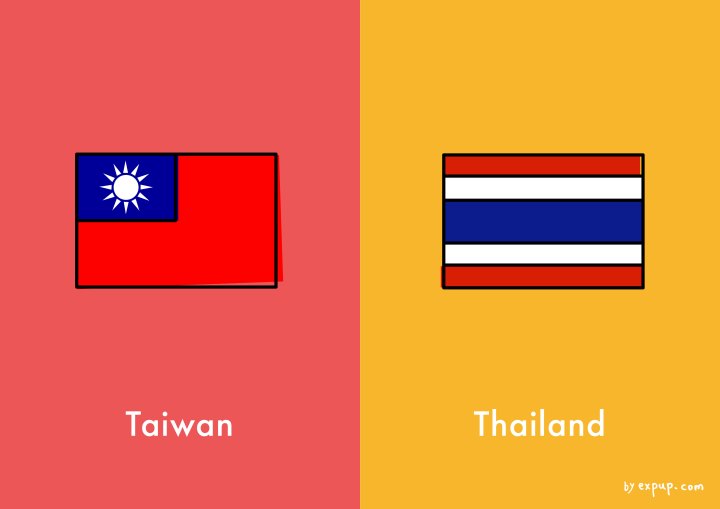 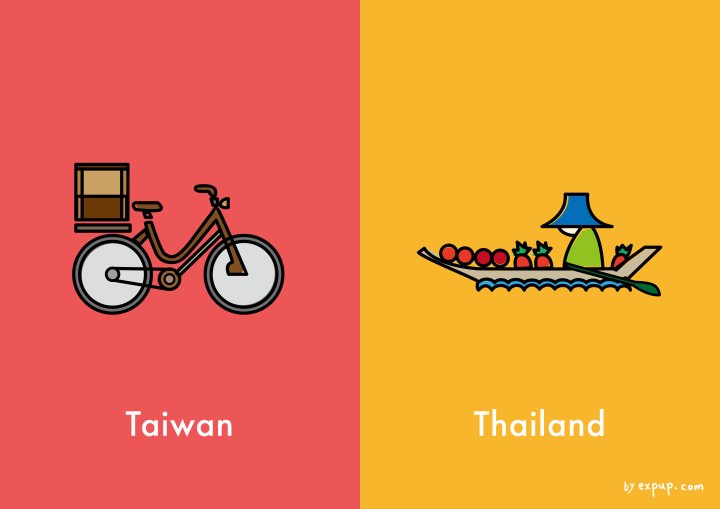 There are bicycle vendors in Taiwan compared to floating markets in Thailand. 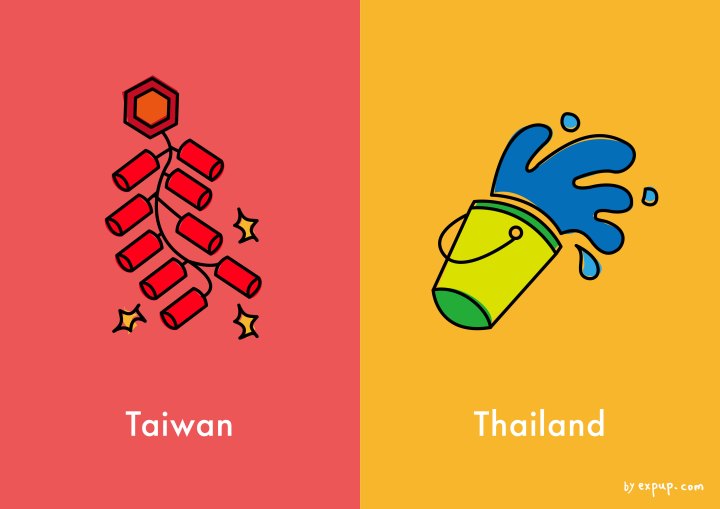 “7. Shape of Countries: The island of Taiwan looks like a potato. Thailand is shaped like an elephant.”

The island of Taiwan doesn’t look like a potato. Its shape is similar to a “sweet potato” or “yam”.

A potato? Taiwan’s shape looks more like a grain of rice.

One thing that Taiwan and Thailand have in common if their attitude toward driving. They see pedestrians as targets, as if they were playing “Carmageddon” for real.

“Blue for monarchy”? Like “blue blood”? Blue for blue balls is more like it. Monarchies worldwide are leeches on society. At least people on welfare don’t expect armed escorts or get pissy and violent when criticized (re: laughable and pathetic “lese majeste” laws used to imprison people for free speech). Monarchies are no better than prostitution rings, they’re paid to have sex and produce children.

As an example of wasteful monarchies are, remember what Lizardbreath did a few years ago? Poor people in England were forced to work for free at her “diamond jubille” or were threatened with being cut off welfare. They were forced to sleep outside under a bridge in the rain and cold.

Lizardbreath also asked that money earmarked for heating the homes of the poor be redirected to heat F**kinhell Palace. “Let children freeze to death” was her attitude. Let her freeze instead.

This article is amazing and needed to be written!!! Thank you :)

FYI.Thai ppl normally said that the country shape like axe. We call our country as golden axe.