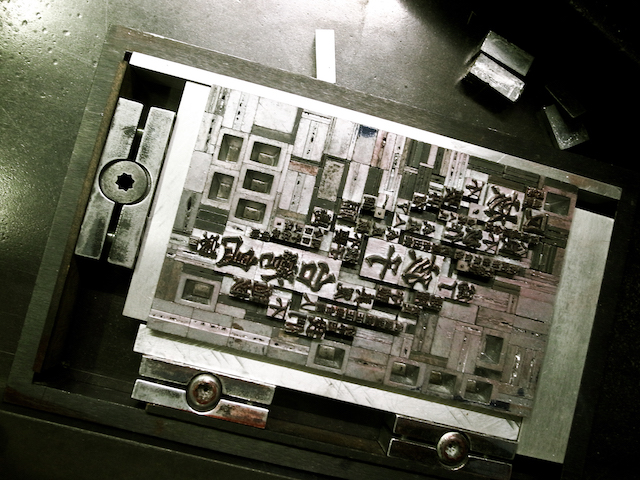 You would not expect a millennial to know how to use a typewriter. And a ‘letterpress’? That’s only a SAT history term to any digital native.

Tucked into Taipei’s Taiyuan Road is a printing foundry that is vastly different from the hardware stores for which this street is otherwise known. The Rixing Type Foundry (日星鑄字行) is home to the last remaining collection of traditional Chinese movable type character moulds in the world, plying its trade for more than four decades with techniques that have been recognized since the Song Dynasty in 1040s. Chang Chieh-kuan (張介冠) is the owner of Taiwan’s last Chinese letterpress and one of the last remaining lead-character makers in the world. He inherited this foundry from his father who founded it in 1969. A practitioner of the once-glorious industry, Chang is out to save not only his family legacy, but also this endangered cultural asset.

It’s a time-consuming and labor-intensive process, but Chang says lead type brings a grandeur to the characters that digital printing cannot – like the different between listening to music on a vinyl record or CD – the former always gives you a warmer feeling.

In the 1960s, Taipei alone was home to 5,000 printing presses churning out a seemingly unquenchable deluge of work. Forty years later, only 30 establishments remain, and Rixing is the last print foundry in the capital.

Before you pop in, we’ve listed six things you should know about this nostalgic letterpress house. Chinese script has no alphabet. Instead it consists of words made up of one to two characters, one of which can comprise of up to 25 strokes. Rixing has one of the largest collections of three-dimensional Chinese characters in Taiwan, with 120,000 moulds of different characters and more than 10 million lead character pieces. Choosing fonts has come long from letterpress to WordPress. Just as you would pick a font style for your blog post, Rixing presently has three basic Chinese typefaces – kaiti (楷體) or ‘regular script’, songti (宋體) and heiti (黒體) or ‘sans-serif black’  – with each in sizes ranging from one through seven. There are more than 10,000 characters in each size that are still in use. The oldest set of type has been preserved for more than 100 years. The word ‘lead’ in Taiwanese is homonymic to ‘destiny’ (緣) and to ‘hand-holding’ (牽) in Mandarin Chinese. It makes lead type a symbolic gift for someone for whom you wish to be involved with on a deep level. That’s why some people come to Rixing to pick up characters to engrave on their wedding invitations or simply to pick up a lead type as a classy and cultural Valentine’s Day present. Chang also jokes there is always a lack of love in this foundry – the word ‘love’ is the most popular lead type here and is always out of stock. Hankering for a classy yet cultural business card? Why not pick your favorite typeface and font size and create an unique and standout old-school staple. You know you wouldn’t do wrong with it, not when Taipei Mayor Ko Wen-je has his business cards printed at Rixing. So you think Chang sits in the foundry crafting lead types batch after batch every day and night? Sorry to ruin your imagination, but there is an automatic casting machine. Chang simply needs to turn on the machine, and the lead will melt under the high temperatures created by gas, producing the lead types one by one automatically. Each piece takes around an hour to finish, and most pieces range in cost from NT$3 to NT$50, depending on the size and design. Many traditional operations are struggling all over the world but few are as ambitious as this letterpress-printing house. Despite his effort, Chang is concerned this craft will soon disappear. Besides selling lead type and printing services, he is working hard to digitalize 150,000 characters to help perfect their lead-type version. The idea is to organise the scans as a reference library of Chinese typefaces that can be easily accessed. Plus, Chang occasionally hosts tours of the shop, in which he recounts the glory of this sunset art and industry, making this place an interactive craft museum which preserves the history of the movable lead type.