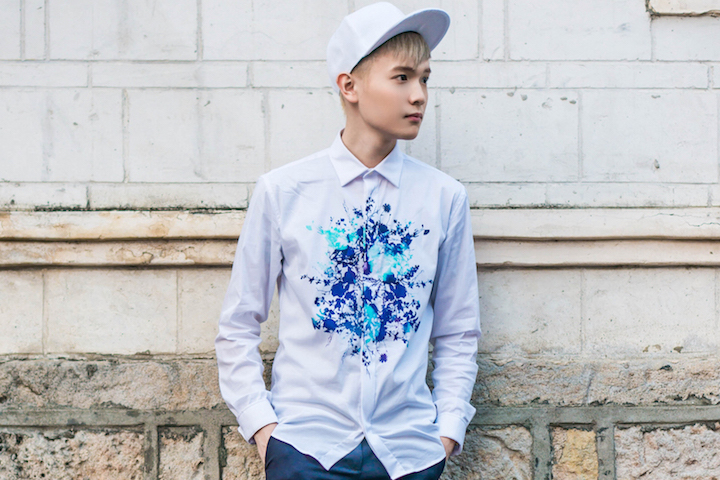 A regular guest at events hosted by the likes of Louis Vuitton and Van Cleef & Arpels, Dake Hu is a rising star in Taiwan’s sartorial scene. Founder of men’s fashion blog D STYLE, the 21-year-old trendsetter has created mix-and-match collections in collaboration with GQ, Marie Claire and Elle. He’s currently in New York studying fashion marketing at Parsons, but we made sure to chat with him about his favorite haunts in Taipei before he took off. Where does someone like Dake like to hang out? Taipei’s Xinyi District is not lacking in its share of fine dining and luxury brands, each new restaurant or flagship store more spectacular than the one before. But where Dake recommends whiling away the hours is Taipei’s up-and-ready eastern district, Dongqu. “There’s lots of great clothing stores tucked here, and the alleys are filled with little coffee shops and restaurants. Later in the day, bars and clubs are lined up one after the other. It’s easy to spend an entire weekend in Dongqu.” A peek at a typical Saturday below: The maze of stores that fill Dongqu ranges in style from rugged, outdoors-themed plain-me to gentleman’s store Nic.7, which stocks shirts, trousers and suits, as well as a variety of smartly patterned accessories. Dark, punkish Secret Service carries brands like Cheap Monday and April77. One boutique that stands out from the rest is multi-label select shop Hotel V. Emulating European opulence with wrought-iron gates set against purple vines, clothes hanging off brass bellman carts and a check-out counter designed like a concierge desk, the shop carries a variety of independent labels from around the globe. Dake suggests enjoying afternoon tea in the adjoining café, The Lobby of Simple Kaffa, after perusing the goods. For a more substantial meal, Dake likes to dine in one of Dongqu’s bevy of international restaurants. His favorite is PS Tapas, which provides authentically Spanish fare thanks to a culinary consultant from Valencia. Go-to items include the seafood paella and classic sangria, but any of the small plates that put Taiwan’s abundant seafood to good use are worth a try. Weekend nights will often find Dake at Park, a fluorescent watering hole discreetly tucked behind a minimalist black facade. Though the bar is especially popular among gay locals, the bartenders, “definitely among the top one or two in all of Taipei,” serve cocktails sure to please any palate. In particular, Dake recommends the Park Tea, an aromatic and potent combination of specially brewed tea and vodka: “everyone who’s tried it wants another.” A few drinks in, and Dake might head over to the recently opened OMNI Night Club, which replaces Luxy in the heart of Dongqu. The central bar and side platforms have been cleared away to provide a much larger dance floor presided over by a dramatic lighting fixture that casts a fervently pulsating glow on patrons below. In a city teeming with night clubs that seem to open, close, and reopen in rapid-fire succession, OMNI distinguishes itself by drawing upon Luxy’s decade-old legacy as Taipei’s original dance venue; according to Dake, “service, decor and performances are really top-notch.”