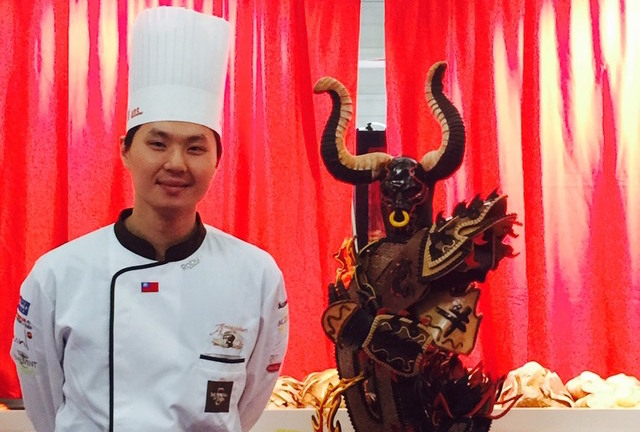 Taiwanese baker Johnny (Yung-hsin) Chen (陳永信) and his assistant Guo Jia-wen (郭家文) has taken home first prize as overall winners and in the artistic category at the 2015 World of Bread competition held in the French city of Saint-Etienne.

Inspired by the powerful “Bull Demon King” (牛魔王) from Journey To The West (西遊記) and qualities such as diligence, resilience and gentleness that symbolise Taiwanese bulls, Chen and Guo crafted the 110 centimeter tall piece of loaf that came out on top. The horns of the bull-shaped loaf alone weighed 1,000 grams.

The winning piece was the culmination of the fifty practice rounds he did before the competition. Close behind at second prize overall was France, followed by Belgium, Italy, Japan and Australia.

A special contest will be held in Taiwan next year by the organizers of the World of Bread competition for the top six countries this year. Held biennially, the World of Bread is one of the world’s most authoritative bread competition where elite bakers gather and test their mettle throughout an eight-hour window and spanning 12 different bread types.