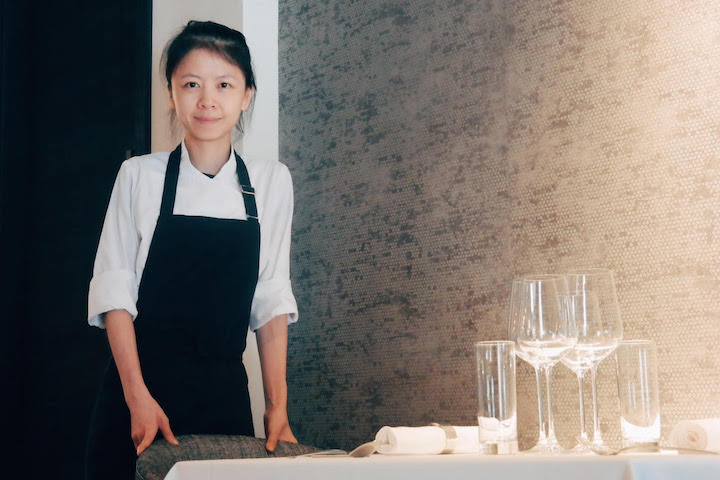 At Ephernité, Chef Vanessa Huang crafts culinary masterpieces from local ingredients. Following a longer-than-anticipated stage at Paris’ highly acclaimed three-Michelin-starred L’Astrance – after the initial stint, “they let me stay behind and work” – Vanessa returned to her native Taipei to open up her own restaurant.

The highly adaptive courses – so far, no menu has been printed, as the dishes evolve constantly based on what’s in season – showcase prized Taiwanese ingredients, like “black-furred pig” or fish from Yilan County; roughly eight-five percent of produce is sourced from farmers who send it directly to Ephernité’s doorstep.

Although just over half a year old, the modern French boîte has already generated much fanfare and is drawing in a steady stream of customers eager to sample the fare; “we’re very comfortable where we currently are.” A successful restaurant, however, comes with a price: work hours regularly extend to midnight, and options for a decent meal at that time are scarce. Leave it to Vanessa Huang of Ephernité, then, to know where the best late-night eats can be found in Taipei. Naturally, the fare is quite different from the meticulously prepared plates Vanessa serves at her restaurant – some places are “really oily” or “add a lot of MSG” – but as she notes, “after a hard day of work, going to one of these places is the easiest way to relax.” Here are her top picks: Located just beneath an expressway that extends over the Keelung River, Drivers’ Club serves a host of Taiwanese “small eats.” Options abound, but Vanessa’s favorites are the bamboo shoot soup, chicken rice and pig intestines. To cure a bout of nostalgia, A-Chun Congee Shop is a good choice. Congee, or rice porridge, is “something we usually cook at home,” but a full work schedule now prevents Vanessa from indulging in that luxury. Forty years in the making, the restaurant is ideal for times when “you miss the taste of home.” Of all the late-night dives that Vanessa recommends, Xiao Li Zi is the one she finds herself frequenting the most, as it sits just a quick walk away from Ephernité. Convenience isn’t the only appeal of the restaurant, though; its food is good enough that “our table is always filled to the brim.” It is, after all, a local late night favorite. Vanessa orders plenty of “what we normally eat with congee”: simple dishes like stir-fried chicken or braised tofu, spread out on platters that deck a central island for diners to pick and choose. Though “four-herb soup” is the specialty featured on the plethora of illuminated signs ensconcing the store, Vanessa refers to A-Tong A-Bao by its zongzi. Pyramidal dumplings of savory sticky rice stuffed with pork and shiitake mushroomes and steamed in banana leaves, the zongzi make for a compact but filling after-work meal. Seafood takes center stage at rechao restaurant Xun Xian Fresh Seafood in dishes like sautéed clams and fried oysters. Arguably the quintessential after-hours grub hub for local Taiwanese, rechao is comprised of casual small plates best shared by a large group, and of the hundreds of establishments that line Taipei’s thoroughfares, this is Vanessa’s pick. It’s apt for times when “you want to drink some beer,” she laughs.