The Ultimate Guide to Eating Your Way Through Shilin Night Market 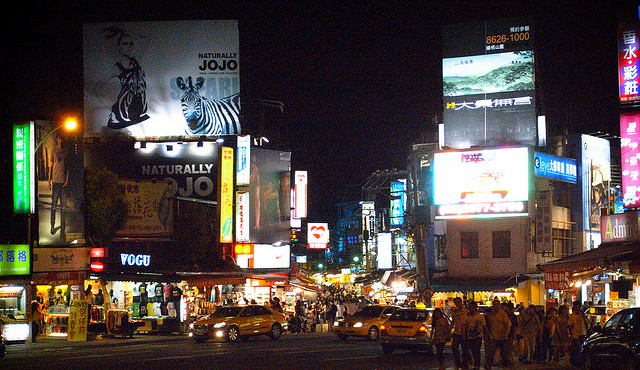 You can’t do Taiwanese street eats without heading to a night market, and you can’t head to the night markets without paying a visit to the Godfather of them all—yes, we’re talking about Shilin, whose sheer size alone is enough to spook the faint-hearted or weak-kneed. It’s likely you’ll pay double the price at the fruit stands, be attacked by spruikers, wait in queues that may never end or simply get lost in this urban maze. But like all good things in life, the bigger the challenge, the bigger the pay-off. And, well, tackling Shilin is a very, very big task. While your average bing (餅)—Chinese pancake, tortilla, whichever Western-equivalent label of your choosing—can be found at any run-of-the-mill night market, Shilin tries to outdo. One of the night market’s longstanding institutions is the Da Bing Bao Xiao Bing (大餅包小餅)—literally translated as the Little Bing in Big Bing. Here you have a small fried bing wrapped in a bigger bing. With 12 flavors savory and sweet, combined with the contrasting hard and soft bing textures, this orgasmic delight is not just for carb lovers only. And if Da Bing Bao Xiao Bing proves to be too little Bing juice for you, head to Guo House for a higher dosage of grease. Brazen and unabashed, Guo House cares not for spring onion cake tradition; slam-dunks their goods into oil to deep-fry; adds equally deep-fried egg if requested. The result? Unparalleled crispy goodness straight out of the vat you may just burn your tongue. Be prepared for maximum oil sprayage and crunch sounds. Size matters for Shilin; it’s only fitting that you eat big when you’re at the biggest night market. Shen Ji, a Shilin old gun that’s been operating since ’67, fires up lines of meaty sausages for lines of salivating meat-lovers and hype beasts every night. With sizeable and freshly-cut-and-grilled goods, Shen Ji beats other sausage stands for not only its history but its value factor. For those in the mood for carbs, Shen Ji also does its own take on the infamous Taiwanese hotdog creation Little Sausage in Big Sausage. Speaking of phallic-shaped food, the weirdest, must-try on the list is its very literal incarnation—A Piece of Gayke’s Penis Waffle Cake. Rather than shamefully avoiding eye contact while downing your sausage, A Piece of Gayke tells you to do it with pride—by clothing that sausage with cake batter, in the mold of that ‘other’ unspeakable sausage. ‘Come’ for great photo-op moments and bad sex puns. It goes without saying: taste and texture do not reflect its visual referent.

image via A Piece of Gayke How do you like ’em buns? Probably not as much as Taiwanese people. Steamed meat buns, Din Tai Fung Xiaolongbaos and Shanghai-style pan-fried buns (shengjianbaos)—Taiwan has it all. Shilin proves to be a bit of a bao mecca, and pan-fried buns stands are invariably a dime a dozen. Legend has it, however, that Original is, well, the original. Having moved five times in its lengthy history—with a stolen trademark sob-story to boot—to its current less-known locale, Original is worth the pilgrimage even if only for the sake of true authenticity. Don’t think the coronary carnage stops with mere Bings and Baos; Taiwan’s street eatery sweetheart and ultimate queen of grease, the fried chicken, is by no means forgotten here at Shilin. Cranking the heat up a couple of notches by frying and chargrilling its chicken, Hsinchu Hometown is worth a mention solely for its daring culinary process. Bonus points for its special Chinese-medicine-style herbal coating, for which KFC’s no-spring-chicken 11 herbs and spices may be no match. It’s like this place hates foreigners. Combining the three most feared Taiwanese ‘delights’—stinky tofu, pig’s blood and century egg—into one, then stir-fried in the traditional Three Cup Chicken or ‘Sanbeiji’ flavor, this dish is about as Taiwanese as it gets. Eat this if you need foreigner bragging rights, Taiwanese brownie points, or just to see how weird ‘Three Weird’ is (hint: not weird at all by local standards). Cold Taiwanese savoury street eats are not only a bit of a godsend in summer, but the perfect segue to dessert. Good Friends Cold Noodles is your Shilin answer, taking on the Taiwanese favourite with same traditional ingredients—pickles, mince, fresh, shredded cucumber and sesame sauce—but an irrefutably original and delicious outcome. Such is its popularity that Good Friends, formerly a pharmacy selling noodles on the side, shut down the former in favor of its unexpected breadwinner latter. It’s undeniable that we have a sweet spot for Taiwanese desserts; that which melts in our mouths also melts our hearts. Shilin’s ice queen is Xin Fa Ting, an ‘old store’ with five decades of reigning experience and reputation under its belt. Purportedly the grand architect of Taiwanese snow ice, Xin Fa Ting serves up mountainous bowls of the stuff with a diverse assortment of toppings – the most popular of which being the matcha and red bean combo.