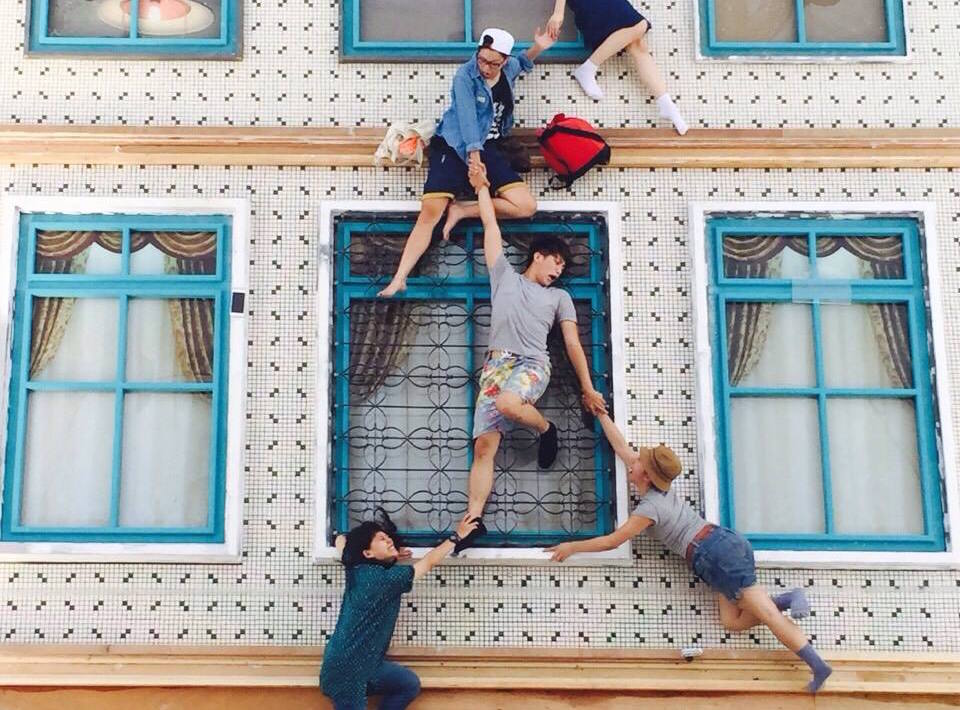 Defying gravity with art, famed artist Leandro Erlich has arrived in Taiwan with a Taiwanese version of his art installment, “Bâtiment”, the Reflective Optical Illusion House.

The Batiment installation consists of a huge mirror is suspended at 45˚ horizontally over a life-sized model of a façade of a house placed horizontally on the ground.

The reflection on the mirror plays with human perception by giving the appearance of visitors climbing or dangling off the side of the building, when in fact they are lying on the façade on the ground. To mimic the more traditional houses that are often seen on the streets of Taiwan, details such as red Chinese New Year door frame stickers, the blue number placard, an air conditioner box and a Chinese medicine store sign were incorporated into the “A House in Kaohsiung” (我家‧你家) installation. It will be on display at Kaohsiung’s Wei-Wu-Ying Center for the Arts (衛武營藝術文化中心戶外園區) until August 2.

Several versions of the installation has been displayed worldwide, with the façade of each corresponding to the country in which it is displayed. One of them was Erlich’s 2013 version of the Dalston House, a Victorian terraced house, which was displayed as part of the London Festival of Architecture held by the Barbican.

Erlich is a well known artist from Argentina who specializes in visual and perceptual illusions. He strives to undermine the human senses by using art to wittily creating a relationship between people and their perception of spaces.

One of his most famed works is the “Swimming Pool” that allows visitors to look down into a seemingly full pool of water with fully clothed visitors standing underwater. The illusion is created through the clever usage of a transparent sheet of glass.

The glass serves as the bottom of a very shallow pool, complete with pool railings but doubles as the ceiling of a room underneath that has aquamarine walls, creating the illusion of a pool for visitors looking down and looking up. Although “Swimming Pool” is permanently displayed at Japan’s 21st Century Museum of Contemporary Art, Kanazawa, you can still fulfill your dreams of scaling the walls of a house without physically leaving the ground by heading to see”A House in Kaohsiung”, which is open to the public between 9 a.m. and 9 p.m. every day.