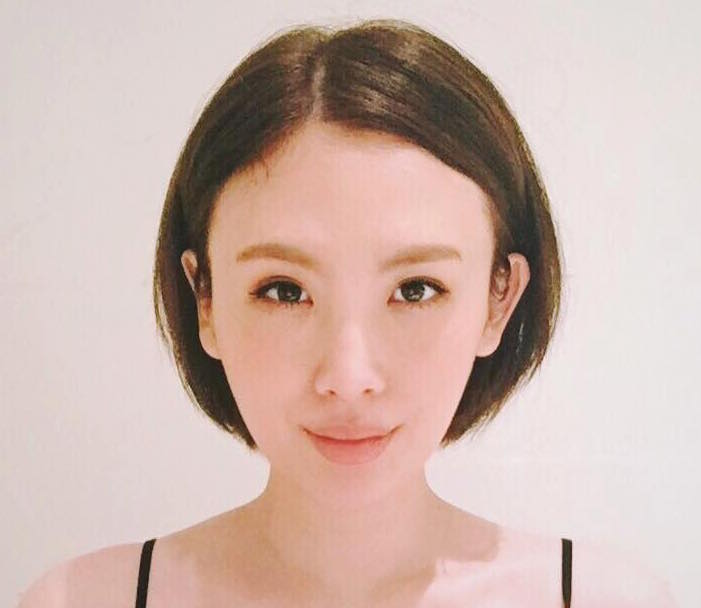 Translated to English by Kassy Cho.

A singer-composer, radio DJ, actress, Taiwanese born and bred artist Waa Wei has recently added to her expanding list of accomplishments with the release of her new picture book Yan Hua (Word Flower). These words and illustrations were not intentionally created for the book but fragments Waa has recorded down over the past few years—lyrics that have not yet fully formed, she says. City543 had the opportunity to sit down with the Golden Melody nominee for Best Female Singer to chat about the big and small things in her life.

First of all, congratulations on your Golden Melody nomination!
首先，恭喜你被提名金曲獎！

Thank you so much!
謝謝你們！

Let’s start off with some quick questions about you. If you were an animal, what would you be?
那麼，先用點簡單的問題來開頭吧。如果你是一種動物，你會選擇當什麼？
A cat. I have two very bipolar cats. But both are like me. One is always grumpy, hates being touched and only comes to find me when it’s in a good mood. The other is very clingy. They’re two very contradictory personalities, but they’re both me.
貓。我家養了兩隻個性極端的貓。兩種個性都和我很像。一隻很愛生氣不給別人摸，只有在心情好才找我。另一隻是很黏人。很矛盾的兩種性格但都是我。 Your favorite quote: “Poetry is the most universal thing in the world, like love and hunger.” – Marguerite Duras
最喜歡的一句名言:「詩是世界上最普及的事物，如同愛情與飢餓一樣。」– 莒哈絲 When you found out about your nomination, who was the first person you shared it with?
當你聽到自己被提名金曲獎的時候，第一個跟誰分享？
Haha, my mind went completely blank when I heard the news.
哈哈，當時腦筋一片空白。

It must have been quite a whirlwind since then. Can you tell us about what an average day is like for you?
接到消息後想必是忙翻天了吧。 那麼，你最普通的一天通常都怎麼度過呢？
I spend most of my time in my house or around it. When I’m hungry, I’ll go in search of something to eat at my cafe. If I’m not at forgood cafe, I’m at home. I spend most of my nights at the radio station, which means I’m most free in the afternoon. I really like the Daan area; it’s just too comfortable. I miss it every time I leave.
大部份的時間都在家或家附近。我肚子餓會去我自己開的咖啡廳找東西吃，不是在咖啡廳就是在家，晚上時間都在電台。所以我最悠閒的時間是在下午。我很喜歡大安區，這區時在太舒服，每次一離開這區就想回家。

So what else has been keeping you busy lately?
最近在忙些什麼？
Events, book signings for Yan Hua (Word Flower) all over Taiwan—north, center and south. I’ll be heading to the Glastonbury Festival in England, and then it’ll be the Golden Melody Awards ceremony right after that.
跑活動。台灣各地北中南的《言花》簽書會，接下來是英國的音樂節，然後金曲獎頒獎典禮。

Speaking of your book, can you tell us a bit about its message?
說到你的作品，你希望透過《言花》 傳達怎樣的訊息？
The book is filled with words—lyrics that are not yet fully formed—and in a way it’s an outlet for my emotions. It lets me re-examine another, different me from the past, a part of me that’s very private. It’s much more than a literal interpretation of the word “flower”. For me,  these are words that have been thrown into a lake and later crystallized. When I took them out again, they melted. But they will again crystalize when the words enter the readers’ hands. The crystalization of these words is a kind of flower in and of itself.
這本書裡面有一些還來不及成為歌詞的文字，也算是我情緒抒發的出口。讓我重新檢視過去不同的自己，是我很私密的部份。他不像字面上《言花》 是一朵花朵的意思。對我來說這些文字都被丟在一個湖裡面，自己長出了結晶。我再次把他們拿出來，所以他們又溶解了。直到這些文字到了讀者手中他們又會再一次有他們自己的結晶，而結晶也是一種花。 Can you share your musical journey with us?
能告訴我們你在人生不同階段做音樂的體驗嗎？
I’m not really one to divide my life into stages. For me, every part is an experience. I’ve always been very sensitive to sounds. There weren’t that many singing competitions when I was young; Five Lights Award was the only singing competition on TV. When I started school, I joined the school choir, poetry slams and speech competitions—everything had to do with sounds and my voice. Filling one’s notebook with song lyrics was also a fad when I was younger, so I’d often ask my friends to sing together after school.

In my senior year, I signed up for a singing competition with my classmate without giving it much thought. I’d never imagined that after my friend was eliminated in the first round I’d go onto win first place. Then I signed with a record company, gradually meeting more and more professionals in the music industry, before I myself finally became a part of it.

After I became the lead vocalist of the band Nature QQQ, there was a period when my throat was injured and I lost my ability to sing. I moved to Hong Kong then, to get some rest and recover. Those weekends were spent hosting an evening radio show, and I’d occasionally fly back to Taiwan to record songs for commercials.

Luckily, thanks to the prayers of several producers, my voice gradually—and miraculously—recovered. Filled with gratitude, I went to church and was baptized. After I got my voice back, it was more powerful than ever—it was no longer lost to the sound of the drums, and I could belt out rock songs. I truly believe that this is a gift from God. Whenever I don’t want to sing anymore or feel like giving up, I always remember that I’m not singing for myself; I’m singing for Him. My perspective has changed ever since then, and I no longer feel as much pressure as I did before. At the same time, I learned not to compare myself to others.

Who are some of the producers who have significantly influenced you?
踏上音樂人的路上遇到對你影響較大的啓蒙老師們是誰？
Nature QQQ’s guitarist—Chico Tsai. He introduced all kinds of international and national music to me, spurring my interest in independent bands. And Macy Chen—she sings jazz and taught me how to use my voice.
自然捲奇哥。他介紹了各種不同國內外的音樂給我，也讓我對獨立樂團產生興趣。教我發聲唱歌的老師—是娟 Macy，她是唱爵士樂的。 What can you reveal about the concept behind your next album?
可以透露下張專輯的的概念嗎？
The style will be more relaxed, kind of like taking a vacation.
下張專輯的風格會比較輕鬆愉悅，有渡假感。

Is there anyone you want to work with next?
接下來想跟誰合作？
Japanese singer Chara.
恰拉。

What kinds of music or performances do you hope to see in Taiwan?
希望在台灣可以看到更多哪樣類型的音樂或是表演？
I hope there’ll be more unexpected cross-industry collaboration with brands, from music, to images, to fashion to even education.
希望有更多意想不到的品牌跨界合作，無論是音樂或影像或服裝甚至是教育。

If Kahimi were to visit to Taiwan, where in Taipei would you take her for a day?
如果比企真理來臺灣，你會怎樣帶她台北一日遊？
I’d take her to my house or around my house and then to the places I usually go to—the recording studio, radio station, Liou Pin Gourmet Restaurant near Yongkang Street.
我會帶她來我家或家附近，然後去一些我平常去的地方：錄音室， 電台，六品小館。 Tell us a bit about your childhood.
可以分享一下你的童年嗎？
We had a piano at home. My dad is a music producer, and my aunts all play the guzheng. Not that my younger sister and I put that much effort into learning the piano. When it came to music, I just liked it. When you don’t have any music instruments, you have sounds. I could play with sounds alone; I could sing. Ever since kindergarten I knew I liked to sing and that it was exactly what I wanted to do when I grew up.
我們家有鋼琴，爸爸是調音師，姑姑他們都彈古箏。不過我跟妹妹也沒有特別好好學琴。對於音樂這個事情，就是喜歡。當你沒有任何樂器的時候，就是聲音。我可以跟聲音玩。可以唱歌。從幼稚園的時候就知道我喜歡唱歌，我長大就是要唱歌。

You spent your childhood in Hualien. What do you miss most about it?
你是在花蓮長大的，那個現在最想念花蓮的什麼？
My grandma’s cooking.
奶奶做的菜。 Is your hometown somewhere you’d like to live after retirement? If not, where would you like to retire?
退休後有考慮回歸家鄉嗎？或是想過退休後想住在哪個城市？
Finland, for its tranquility, its relaxed pace of living. It actually feels a bit like my hometown in Fuli, Hualien. Perhaps I’ll want to live in a place like that when I’m old.
芬蘭。很喜歡那裡很安靜，步調很慢的感覺。其實有點像我的家鄉花蓮富里。也許我老了以後會想住在那樣的地方。

Do you have any advice or words of encouragement for recent graduates or those pursuing their dreams?
最後，請給最近的畢業生及追夢人一些建議和鼓勵的話。
Don’t be afraid. I think a lot of people are too scared. Scared of what others will think. Scared of comparing themselves with others. No matter what others say, hold your ground—stay true to what you believe and what you want to do. If you can do it, then that’s it. Life will employ countless methods to let you know where it wants to take you. So all you have to do is relax, and not be afraid.
不要怕。因為我覺得很多人都太害怕。害怕別人的眼光，害怕自己跟別人比較。不管別人說什麼，堅持自己相信跟想做的事。做就對了。你的生命會想盡各種辦法來告訴你他要帶你去哪裡。所以你唯一下要做的就是放輕鬆，不要害怕。