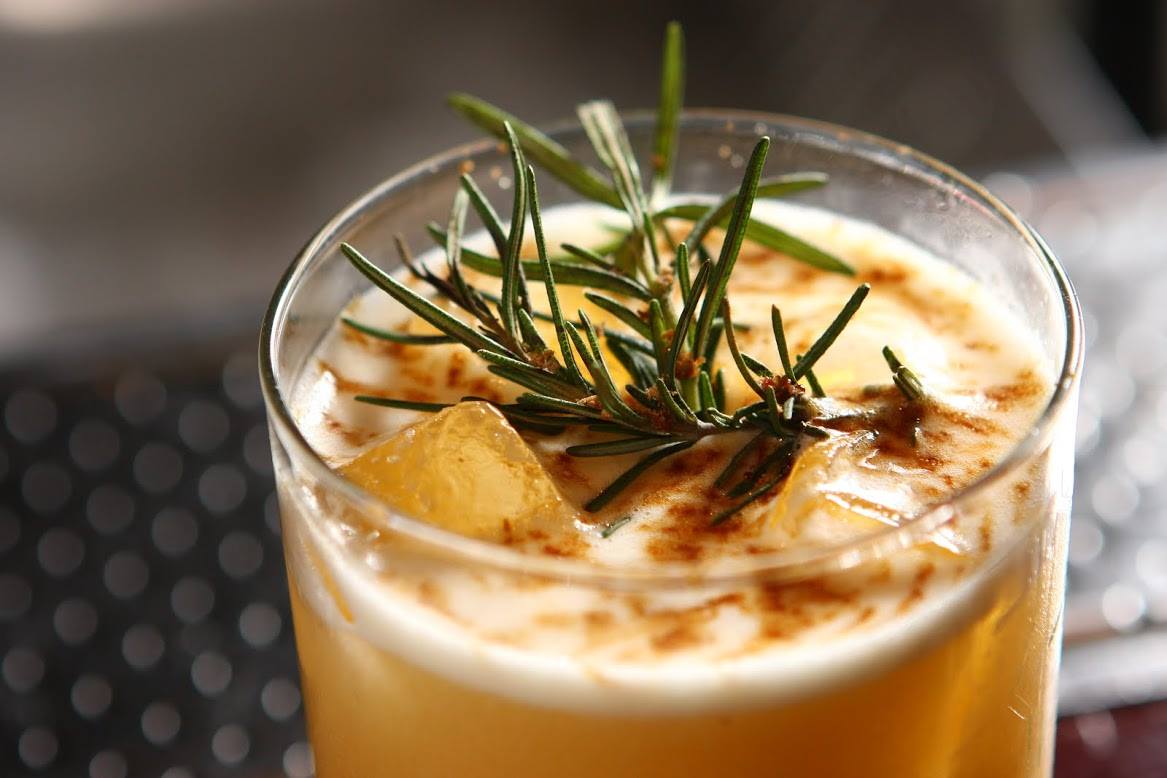 In 2014, we showed you the top bars in Taipei, but a perfect night on the town can be ruined when you waste your hard-earned money on a mediocre drink. Feeling that buzz should be done in style and not through boring vodka shots, which is why we’ve compiled our top recommended cocktails to order at each of Taipei’s hottest bars. Those of you who enjoy something both classic and refreshing, try the mysterious Bourbon Buck at R&D. With each element of the cocktail perfectly balanced, the Bourbon Buck provides for an enjoyable experience with flavors that are neither too sweet nor too sour. Capped with a lime and in a vintage old-timey copper mug, the Bourbon Buck looks quite humble but packs a punch. A cocktail true to its fruity name, the pink drink is a favorite amongst females, not just for its sweet aroma—thanks to a rosemary on top à la the Brown Sugar cocktail (made with fresh banana, lime juice, brown sugar, havana escpice rum and pineapple juice) pictured above—but for its beautiful presentation; the beverage comes intertwined with either a pink flower or a slice of dragon fruit alongside.

With the rim of the cocktail glass coated in chocolate dust, the Stolen Secret is a dessert in and of itself. Upon the first sip, you are hit with the fruity notes of peach and passionfruit which overlay the vodka and swirl in with the chocolate dust to form a surprisingly delicate taste.

Aquarium or Guava Cocktail at fourplay Once you get a look of the Aquarium, it’s quite clear no other name would suit it better, as in its delicious concoction swims a goldfish fashioned out of orange peel. With its bright blue color similar to the ocean, the Aquarium presents itself as the perfect summer refresher with plenty of ice. For something less splashy, try the Guava Cocktail at fourplay, a much more humble yet unique drink served with a slice of guava around the rim. The Slippery Nipple isn’t a name wasted on this drink, made out of Baileys Irish Cream and liquer; it’s definitely one of the best-prepared milk-based alcoholic beverages in the city. The Slippery Nipple is sweet and slips down the throat, with light undertones of alcohol, kind of like drinking a really well-done milk tea.

image via The Pig & Whistle Serving up Taiwanese delicacies instead of the usual bar grub, Tickle My Fantasy is known for its Long Island Iced Tea, the strongest in Taipei and guaranteed to have you seeing stars for the rest of the night. Many can attest to how potent the cocktail is, with the taste of the original Long Island singing through the intense concentration of alcohol. This is not a journey for lone souls but a challenge to partake amongst friends. The Long Island Iced Tea is also available on the go, served in an interestingly traditional plastic bag and straw. Betel Nut may not bring such a pleasant taste to mind, but the Mexican Betel Nut Shot at Trio provides an innovative take on the regular old tequila shot and lime. Instead of a regular lime, the betel nut aspect of the tequila shot is represented by a thin slice of lime heavily coated in sugar and the surprising third ingredient, coffee powder. The explosion of sour, sweet and bitter complements the aftertaste of the strong tequila. Alchemy presents itself as a very classy and dimly-lit bar, and its drinks live up to the brief. The Old Fashioned starts with a base of bourbon in a crystal tumblr, adding in layers upon layers of flavor through sugar cane and bitters, topped with orange rind for added effect. For a fruitier and more delicate flavor, the Chrysanthemum Fizz tastes like a tango between grapefruit and floral flavors on the tongue. The elements of Thai cuisine are simple: it needs to be a perfect balance of sweet and spicy, sour and fresh. The Thai-tini at Ounce raises the standards of Thai cuisine by using the speakeasy’s own unique chili-infused vodka, to which fresh lime juice and cilantro are added, giving your taste buds that exciting zing. The best-kept secret of Fucking Place is the little known Kyoho Grape Cocktail (巨峰葡萄調酒), which is a literal secret as you won’t be able to find it on the regular menu. Ask for the Kyoho Grape Cocktail and be pleased with the sweet yet sour concoction the bartenders inconspicuously mix for you. B-Line offers an instantly classy and intimate environment, and the Passion Peach and Mango Brave ring true to their tropical roots. Both drinks are perfect as a cooler for the scorching summer heat with plenty of ice and fruity flavors to quench the thirst.