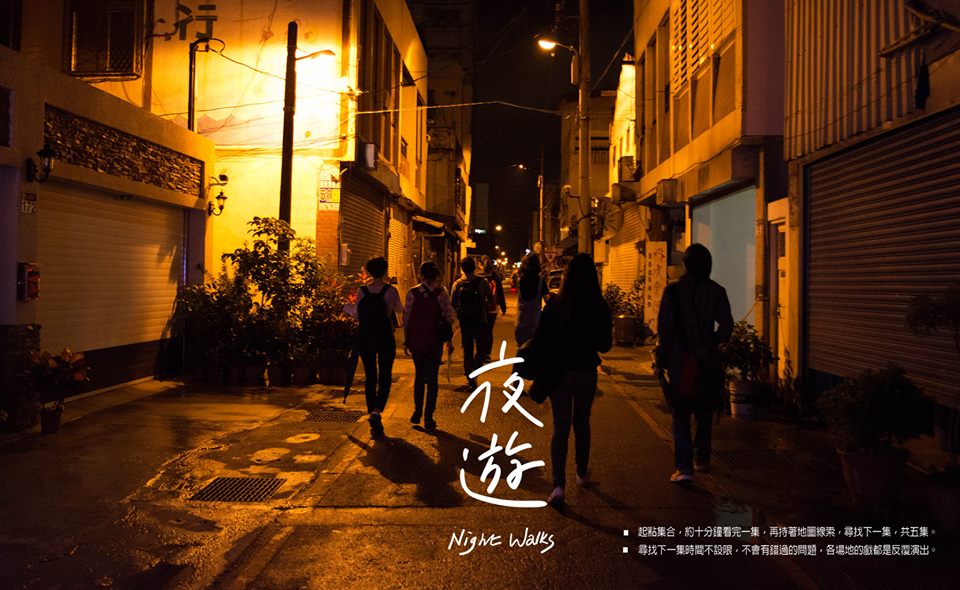 Enjoying a good production no longer means being confined to a chair and fighting for elbow room on the armrest in a dark room.

If this sounds like a dream that’s too good to be true, Shan Dong Ye Theatre Troupe’s (山東野表演坊) rebuttal is its motto: Only those with dreams have power.

In collaboration with students from Donghua University, the troupe has launched an interactive, walking theater production, Night Walks (夜遊), that will make its debut along the alleyways of Hualien on June 25. Night Walks is a five-act production placed at five separate locations across Hualien. Each act is 10 minutes, and the entire production lasts between 45 and 90 minutes.

Similar to outdoor team-building games, the audience is given a map and must pass “levels” by following the clues to find the next act, located across some of the best secret spots in the city.

Rather than set in stone, the storyline is directed by the decisions of the audience, allowing them to become a part of the play, which focuses on the underlying theme of love. Organizers have also worked with local vendors to provide a fully interactive experience that involves activities such as sightseeing as well as enjoying local cuisine.

Every stop and every turn adds a piece to the greater picture that will eventually “bring light to the darkness”.

Night Walks will be on the streets from June 25 to July 4. The show runs every Thursday, Friday and Saturday night for two weeks at the Hualien Cultural Creative Industries Park and its nearby alleys.

Tickets for either three, four or five acts can be purchased online or at your nearest convenience store. There is a 10 percent discount on tickets purchased before June 24.

all images via Night Walks