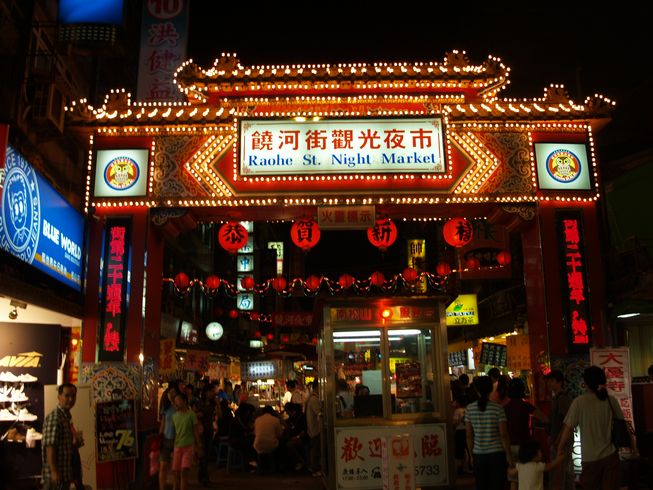 Located literally right outside the new Songshan MRT stop and the Songshan Train Station and along the Keelung River, Raohe Night Market attracts massive crowds every weekend. The second oldest tourist night market in Taipei, established by the government in 1987, is a favorite go-to spot for locals and tourists alike for the quick meal and some sights to see. At the very entrance of the night market adjacent to the historic temple, you’ll see a massive line swirling around a giant yellow-and-black sign. That, is the line for hujiao bing, or pepper biscuits. Believe the hype—people aren’t queueing up for no reason. Customers can witness the incredibly generous amount of meat and scallions being stuffed into the dough before it is put in a traditional oven. You’ll feel very fulfilled by just one of these meaty bad boys. But be sure to let it cool for a bit, as they’re fresh out of the oven and quite ready to burn the tongue of any eager eater. Who would’ve thought the night market could be a place to get something healthy? Raohe is well known for its herb stew ribs and lamb chops—meaty bones stewed to perfection in Chinese medicinal herbs. The pieces of meat fall off the bone and melt in your mouth, and the soup is a great way to warm up in a cold winter night. Don’t forget to also try the stand’s braised pork rice (滷肉飯), which is also delicious for the extremely affordable price of NT$25! This food stand in Raohe is famous for its delicious crispy fried taro, giving a modern twist to a traditional snack. The treat is offered in four different flavors, the original, the egg yolk with red bean past, the egg yolk and dried pork, and another vegetarian option with melted cheese. It’s a recipe that can’t be found in many other night markets, as well as a local favorite. Another popular gem at Raohe is the Maru Maru Yaki, literally translated from Japanese to “Round Round Pancake”. A popular dish originating from Fukushima, the Maru Maru Yaki is a traditional okonomiyaki pancake with a round-shaped twist. The pancakes are made in round molds that give them an extra crisp, then garnished with signature fish shavings and Japanese mayonnaise. You can’t conclude a trip to Raohe without a traditional Taiwanese dessert like douhua, aka tofu pudding. This old shop is known for its sweet syrup and generous amounts of ingredients including peanuts, taro, sweet potato and more. At only NT$25 per bowl, this is the perfect steal to fulfill your sweet tooth and cap off the night. With almost 300 years of history, this temple sits at the entrance of the bustling night market. Beyond acting as the meeting point for the locals before they feast away at Raohe, the extravagance of the historic temple fills up the many a memory card of photography enthusiasts and visitors. The word “Raohe” literally translates to “surrounding the river,” so it’s a given that a trip must entail a nice stroll—or YouBike ride—down the beautiful riverside park, alongside the Keelung river. The scenery is excellent any time of the day, with romantic, quirky art installations (perfect photo ops) and a rainbow bridge (彩虹橋) that lights up the river at night.

After filling yourself up at Raohe, walk it off at the maze of shops at Wufenpu. The area is known for its affordable clothes since it’s technically a garment wholesale market. The rows and rows of shops are lined with all sorts of clothing, some hung up and some packed inside an entire floor of bags.