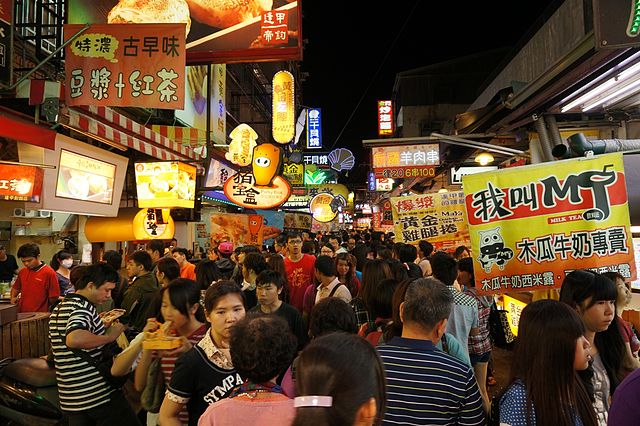 You can only say you’ve been to a night market if you munched on local night market snacks while doing your shopping and haggling, and a visit to Taichung’s most famous night market—Fengjia Night Market—is no exception. But when it comes to the food at Fengjia, the selection is practically overwhelming. To help you plan your perfect culinary expedition, we’ve compiled the definitive top 10 food stands you simply must try when visiting the night market in Xitun District.

For your convenience, the list is arranged in the approximate order that you would encounter the stalls when entering Wenhua Street from the Fengjia Road entrance. Items with an asterisk * indicate stands with a second branch close by, which you should consider visiting instead should the wait prove too long. Upon entering Fengjia Night Market, one is greeted by parallel lines at two different Taiwanese hot dog stands. It’s a feud as old as time, with both stands claiming to be the founding store. So, left or right? We usually pick the one on the left, for its glutinous rice layer is cooked to perfection, dense and sticky yet easy enough to bite through, enfolding the juicy and flavorful Taiwanese sausage. If the line is too long, the store’s other branch sits just a few steps away, and truthfully, bloggers say the stand on the right ain’t half bad either and you probably won’t be able to tell the difference. Located at the corner of Fengjia University, this 30-something-year-old store draws a line so long that it usually blocks up the already cramped entrance onto Wenhua Street, and it’s not difficult to see why. The fried sweet potato balls sport a springy yet firm exterior and are filled with soft, aromatic sweet potato. Although less popular, the stand’s candied sweet potato is also very good. Ever put off eating shrimp because you didn’t want to deal with the whole business of peeling off its shell? Well you’re in luck, lazy man’s shrimp was invented just for people like you. The shrimp is grilled for so long that the shell softens and becomes an edible crunchy layer–a fascinating process you can watch over the stall. The shrimp is coated in an assortment of flavors, the most popular of which is pepper and salt with lemon. Take a break from eating and quench your thirst at this drink shop. It’s hard to go wrong here, but some trademarks include the iced lemon tea–a blend of tangy and sweet–and Hong Kong-style silky milk tea. Don’t forget to get half sugar unless you have a sweet tooth. Night markets and fried food go hand-in-hand, and Fengjia is brimming with options, among them Golden Squid. Chewy squid is filled with risotto, fried to a crisp, drizzled with a sauce of your choice and served atop of lettuce. The risotto is buttery with a hint of cheese. Don’t underestimate this dish; it’s very filling, and sharing is recommended. For an equally innovative approach to fried chicken, try the gold left and right legs, where the question of left (fried) or right (grilled) arises again. At each, a tender and juicy chicken drum is topped with dried parsley leaves, chili powder and a sauce of your choosing. Most prefer the grilled right leg, which comes covered in cheese, and recommend the house special salsa sauce. If chicken’s not your thing, try the nearby Porky Box, which provides similar fare, except on fried pork cutlet. Customers can sample the five different sauces–French vanilla tartar, bacon and cheese, honey mustard, seaweed and salsa–before choosing their favorite to season their cutlet topped with corn salad. The highlight of this longstanding shop is its soup broth, simmered with mushroom and pork bone separate from the ingredients to create a natural and sweet taste. You can always expect the ingredients here, although a typical selection, to be fresh and not overcooked. Oh and did we mention there are endless soup refills? Extremely ideal for a cold winter’s night. Whoever saw a gua bao so cute? This store’s are not too greasy, relatively large–probably the size of an actual bear paw–and extremely customizable from the filling down to the sauce and even flavor (and color) of the bun–brown sugar, milk, whole wheat, taro or strawberry. Egg pancakes from Ming Lun are often considered some of the best out there as its crust is also made on the spot and not just a pre-made layer slapped on top of an egg. The crust is cooked à la a crepe, resulting in a thinly crisp exterior complementing the softer interior filled with egg and spring onion. Be sure to get Ming Lun’s unique sweet and spicy sauce to go with your egg pancake.