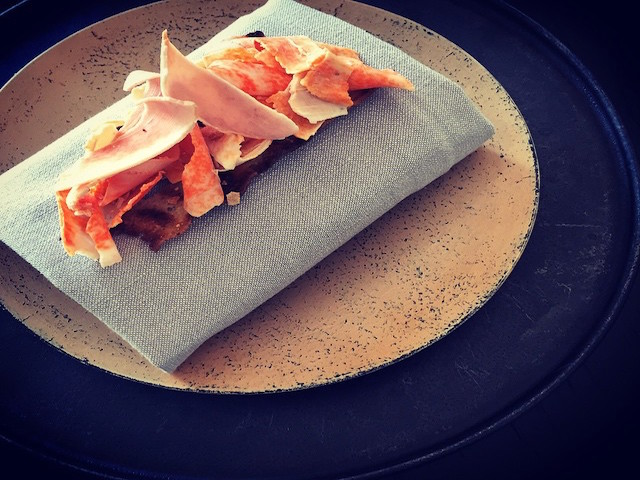 Long gone are the days when the culinary scene in Taipei was only limited to salty and greasy street food. Taipei’s repertoire of fine dining restaurants is now one of the best in Asia, and the city is home to an ever-increasing selection of the world’s most innovative and impressive chefs and their restaurants that cater to all tastes and styles. Here are some of the best places to frequent for an elegant and exquisite dining experience. A well-known name around the world, L’ATELIER de Joël Robuchon is practically a synonym for the Michelin star. With other locations in cities like Paris, London and Tokyo, L’ATELIER maintains its high international standard in this Taipei branch. Set up with an open-kitchen and surrounded by the red and black theater-like interior, customers can feast with their eyes on the fascinating preparation process before their dishes arrive at their tables. The atmosphere is not too formal, and the staff are glad to explain to customers the preparation and ingredients of dishes, from its selection of bread to macarons to its creamy and rich butter mashed potato. L’ATELIER is the perfect place for a memorable French culinary experience or a celebration. With its celebrity chefs, excellent décor, top-tier dinnerware and exquisite French cuisine and wines, De Loin posits itself at the top of the list of restaurants where food meet art. De Loin, headed by Chef Gordon Chen, serves modern French food with occasional Japanese influences. Besides its oriental-western fusion decor, the place is noted for its top-notch tableware, from Japanese Narumi ceramic plates, Swedish SOLA cutlery and German Schott Zwiesel glasses. Each table at De Loin has a “personal butler”, an expert who will serve up and introduce every course, from starter to dessert. Lauded by New York Times as one of the “10 Restaurant Worth a Plane Ride,” Taiwanese chef André Chiang’s RESTAURANT ANDRÉ in Singapore has opened its first branch, RAW, back in Taipei. RAW is the epitome of bistronomy, French casual fine dining–quality food and casual decor. Reinterpreting Taiwanese cuisine, Chiang names each dish with its three main ingredients, making up eight dishes with a total of 24 ingredients on the menu, as inspired by the 24 solar terms in the Lunar calendar. Nordic cuisine doesn’t necessarily spring to mind when you think of high-end Taipei dining experience–at least not until chef Richie LIn set up MUME in Taipei in December 2014. With a team of veteran chefs, MUME aims to introduce modern European cuisine using local and seasonal ingredients. Diners at this modern yet rustic restaurant are treated with six sophisticated courses that can be enjoyed over side dishes and beverages such as liquid nitro yogurt and homemade apple balsamic vinegar. Something usually gets lost in translation when it comes to interpreting Japanese culture and cuisine—but it’s not the case with Mitsui Cuisine.  The restaurant is decorated to resemble the alleys and houses in Kyoto and combines the aesthetic of traditional Japanese cuisine with fresh and quality ingredients and seafood, making the sashimi platter and oyster must-tries at this restaurant. Dishes on the set menu may vary according to the ingredients in stock, and the waiters are happy to introduce every dish. Tucked in the mountains in northeastern Taipei, Shi-yang is where feast meets retreat. Housed in a two-story Japanese-inspired wooden building with an open courtyard, the restaurant harmonizes well with its natural surroundings with its minimalist but elegant decor. Diners can enjoy up to ten course, all artfully presented, in one of the restaurant’s tatami-cover dining rooms. Established in April 2014, Mountain and Sea House hails back to the Japanese colonial era, when banquet halls were full of Taiwanese haute cuisine, prepared by chefs from farm-to-table ingredients. Housed in a traditional home that once belonged to a wealthy Japanese doctor, the restaurant offers well-designed, prepared and presented Taiwanese dishes that were often made from family recipes of the chefs. The Pork Leg and Braised Pork with Anka Sauce is made with a recipe that was passed down through six generations.

image via Mountain and Sea House At the top of W Taipei Hotel you will not find a presidential suite and executive lounge but the YEN Chinese Restaurant, a modern Cantonese eatery. Chef Jereme Leung infuses classical dishes with a stylish innovation to create his interpretation of nouvelle Cantonese cuisine. With a bird’s eye view of Taipei, YEN offers a wide range of exquisite dim-sum, seafood and Cantonese signature dishes such as roasted pig.