The Who’s Who of Taiwan’s Pineapple Cake Industry 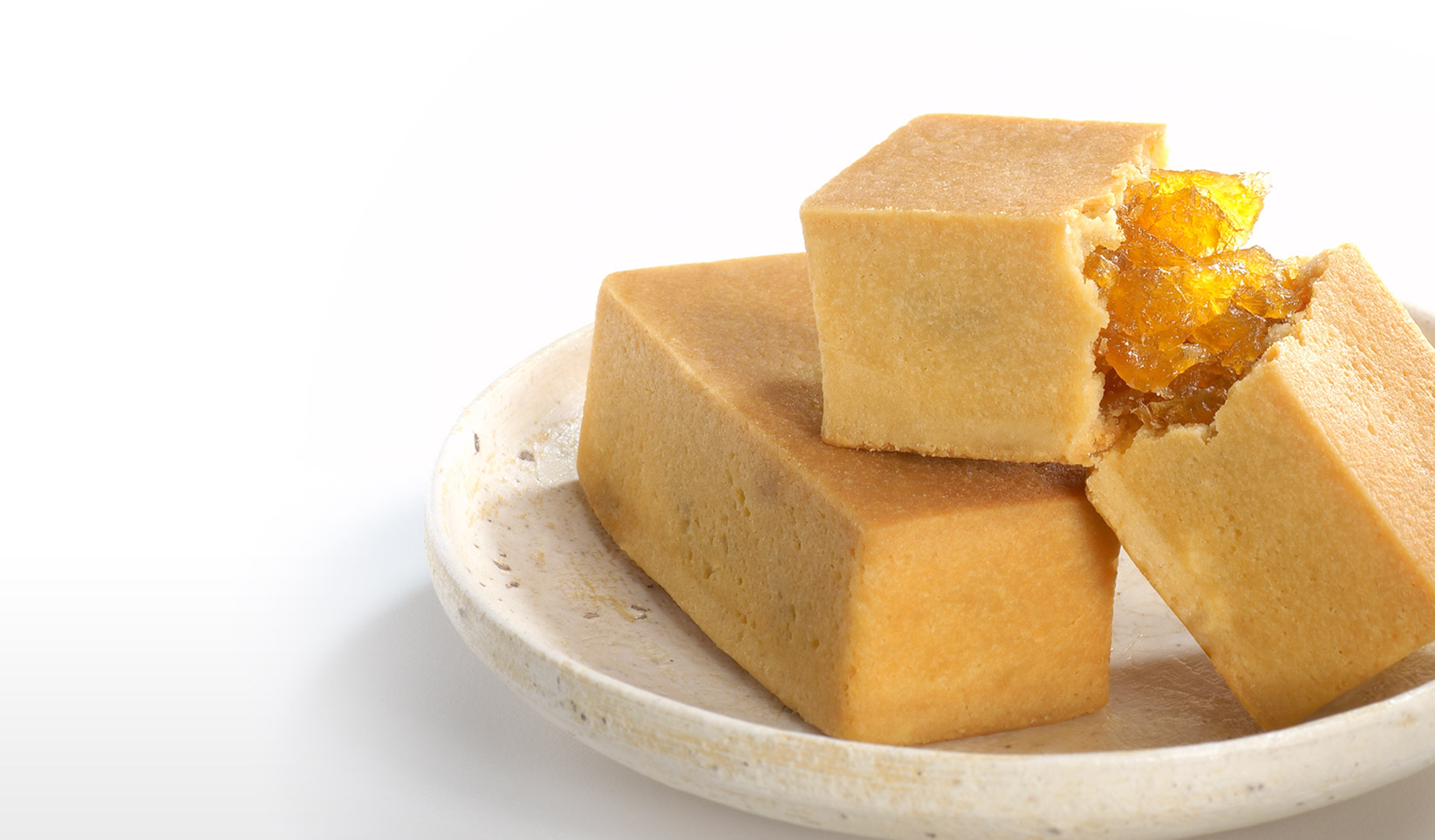 Undoubtedly, pineapple cake (Also known as pineapple pastry, pineapple shortbread, pineapple tart, or “鳳梨酥 fèng lĺ su”) is one of Taiwan’s top selling souvenirs. Tourists visiting from Japan, China, and Singapore are truly, madly, and deeply in love with these miniature pastries; with the support of the tourism bureau and the media, these tiny “golden bricks” sold over NT$390 million in 2013, which equals a total 6 BILLION pineapple cakes!!  So how were these irresistible cakes invented? The creation of pineapple cakes is traced back to the 1970s, when pineapples were one of Taiwan’s main export goods. Pineapples were so richly harvested that people back then had to think of ways to use them up. Great minds came together, and after lots of trial-and-error, pastry chefs finally discovered an ideal ratio of pineapple to winter melon to create the most fruity, yet not overly tangy jam, which is divinely complemented by the crumbly, buttery crust that seals everything altogether.

However, the awesomeness doesn’t stop there! Consumers nowadays are becoming more concerned over the use of artificial food additives, so many famous pastry shops are now tweaking their recipes to using more “natural” ingredients. As a result, another prototype of pineapple cake is emerging and taking over the market, called “土鳳梨酥; tŭ fèng lĺ su”, which as oddly as it sounds, means “AUTHENTIC pineapple cakes”. Does that mean that the traditional style of pineapple cakes are un-authentic? Not exactly; it simply means to that the jam in this new type of cake is made purely from pineapple, with no winter melon mixed in it. The filling of the new authentic pineapple cakes tend to be more tangy and fibrous, and the crusts lighter and more crumbly.

In order to give you a subjective and unbiased guide, I summoned my lovely knights of the round table and held a taste test on 8 of Taiwan’s most famous bakeries in hopes of providing readers of City543 with the most detailed insight into the island’s best pineapple cakes! Here are the eight pastries we tasted. If I left out any shop that is noteworthy, please let me know!

Sweetness and sourness are rated on a scale from 1 to 5, with 5 being the strongest. Sunnyhills is situated in a quite corner of the Ming Shen community. Once you enter the shop, you’ll be greeted by a waiter who will seat you at a table and offer you a complementary piece of their infamous pineapple cake, along with a cup of tea. They are so proud and confident of their pineapple cakes that they aren’t shy about sharing it with the world! This rising star of a bakery has shops in Japan, Shanghai and Singapore, and if you’ve ever tried one of their pineapple cakes, it’s not hard to see why people are crazy about it. The jam filling is fibrous and zesty, with a very natural fruity acidic flavor. The crust is very crumbly, with pieces tumbling off with every bite, but that won’t stop you from picking up the crumbs and stuffing it back in your mouth! Always expect to wait in a long line when you’re trying to go to Chiate. The jam of their pineapple cake is glutinous and mildly sweet, and what makes it stand out is the hint of fruity tanginess that is absent in others; and of course, it pairs wonderfully with their milky, buttery crust. What awes me the most is the variety of pineapple cakes that they offer, from melon, walnut, to cranberry, just to name a few. If you’re a gourmand or foodie, you should definitely give it a try! Originated in Taichung, Dawn Cake’s customer demographics spans not only Taiwan, but across to Japan and other Asian countries; if you’ve ever visited their shop in Taichung, you’ll know why. Its lavishly decorated interior matches that of an ancient library/apothecary, which makes sense as the building was once an eye clinic built by a Japanese optometrist, Miyahara. On top of its awesome decor, their pineapple cakes certainly raise the bar! The jam is lumpy with bits of pineapples; though it is hard to see the fibers of the fruit, it is very flavorful! While the taste is quite acidic, it is balanced out by the sweet and buttery crumb crust. Dawn Cake only offers authentic style pineapple cakes, but if you’re not a fan of tangy pineapple cakes, I’d say give their “No. 17 Pineapple Cake” a try!  Delivery available, free domestic shipping for $6000 or more. My Sense One insists in using only natural ingredients in their cakes, and also won the the Best Pineapple Cake award in 2012. Needless to say, the jam has a strong pineapple flavor that is more fibrous than others, with authenticity that you can both taste and see! I recommend these to those who want a good kick of fruity pineapple tartness. Being one of Taiwan’s leading pastry chefs, Wu Pao Chun’s persistence in providing customers with products of the highest quality has won him fame and customer loyalty. The Wu Shien (無嫌) Pineapple Cake–named after his mother–is buttery and sweet, but at the same time light and easy to gobble. Interestingly, salty duck egg yolk is one of the key ingredients, but its taste is undetectable. The jam filling does not have as much of a strong tart pineapple taste, and its more similar to traditional pineapple cakes in the sense that it is sweeter with a pinch of maltose. Famous among Chinese tourists, it was very difficult to get your hands on a Vigor Kobo! The authentic pineapple cakes here have a strong spike in sweetness. There is no hint of acidity in the jam, and the taste is lusciously sweet. Quite similar to Wu Pao Chun, the filing is not as tart or strongly pineapple flavored and has a hint of maltose. As for Vigor Kobo’s traditional pineapple cakes, they were not as impressive as we expected. The crust has a lardy and a pulpous texture, and the jam filling was chunky and syrupy, with a noticeable artificial aftertaste. We tasted a hint of saltiness in the crust, which was a plus to the cake’s overall taste. The jam filling is glutinous with bursts of natural fruity sweetness. This sweet and savory combination left a very good impression; it’s a shame that we were unable to try their authentic style pineapple cakes. Leechi has been around for over a century, and it’s safe to say you can never go wrong with Leechi. This shop can be praised for its dense, buttermilk crust alone. Their authentic pineapple cake also has just the right amount of sweetness. Like Dawn Cake and Vigor Kobo, the fibers are not visible, but the jam has a chunky, jelly-like texture,  which we later found out was due to the addition of nata de coco to their filling mixture. As for their traditional cake, it had a thinner crust and chunkier jam. Strangely enough, it was hard to tell whether there was more pineapple or winter melon in the mix. This post is presented by Citybudd
Discover places you wouldn’t find otherwise in Taipei with our local expert– Aileen.

the ratings on each of the cakes are missing?….

Hi Wenlin, we just added it back! Thanks for the heads up.

Tell me what you know about Royal Family Pineapple Cakes

Great article – though you MUST go back and taste Amo’s authentic pineapple cake… Your listing Sunny Hills #1 is accurate, but I assure you that Amo authentic (they label it “black pineapple cake”) is easily #2!! One of THE BEST in Taiwan for sure..!!! :)

Thank you for the wonderful information