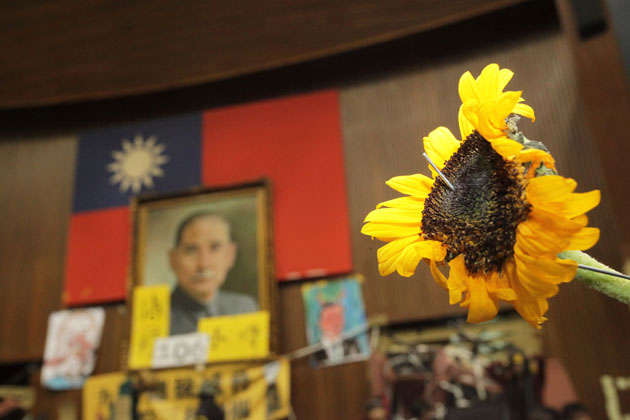 On March 18th, 2014, a group of protestors composed of university students and members of other organizations climbed over the fence and smashed the windows of the Taiwan Legislature. As soon as the protestors got into the parliamentary chamber, they used chairs and other objects to block all entrances. Later that night, the protestors announced that they have officially taken over the Legislature in order to express their frustration at the unfairness of the 服貿. Here are some of our  observations and questions regarding the incident:

1) Breaking into the Taiwanese Legislature AND Executive Yuan just like that.

While we were still wondering how protestors managed to get into the Legislature, another group of protesters stormed and occupied the Executive Yuan just a few days later; a building representing the most powerful branch of the government. If a group of students managed to take over 2 of the 5 major government buildings of Taiwan, what does that say about the security of our government buildings?

2) Protest? Or a grand tour of Taiwan Government Buildings? Taiwan is one of few countries where the youth population has a high participation rate in political activities. It’s very touching to see so many young people of Taiwan showing how much they care about their country, and demonstrating that they are willing to stand up for what they believe in. However, there were also some students who appear to have joined the movement for inappropriate reasons. Two female student protestors checked in at the Executive Yuan on Facebook, posting the above photos of themselves as if they were simply taking a tour of the building. Dear female students: please ask yourself – why are you here?
photo via Ettoday

3) “They ate my sun cakes that I ordered from PingTung!”

The media interviewed various government officials at the Executive Yuan, the morning after the protesters were evacuated. One of the government officials- Jia Chi Hsiao, complained of how the students ate his sun cakes, and couldn’t stop emphasizing that the cakes were from PingTung. Seriously, who cares?! After a crazy night where many protestors were injured, this is the only comment that you have?

4) The green jacket that Lin has been wearing is now sold out.

The first group of students who stormed the Legislature have now been in the building for more than a week, and they really don’t have a chance to change clothes. The leader of the protestors, Lin, has been shown on TV every single day wearing the same green jacket.  This turned out to be free advertisement for the clothing brand; there were so many people asking about his jacket that it is now sold out in Taiwan. Even Lin was prompted to post on Facebook: ” Stop asking me where I got my jacket! If you really want to know, I will answer the question when the protest is over.”
photo by 胡建森

After the government official Jia Chi Hsiao made such a big fuss over his sun cakes, supporters of the movement went ahead and ordered 3,000 sun cakes for him. He refused to accept the “special gift” when the sun cakes got delivered to his office. The sun cakes then became snacks for the protestors outside of the Legislature. Thanks to Hsiao, this became free advertisement for local businesses and Sun cakes sales are growing like never before.

6) Gotta love the creativity of the protestors.

Here are some creations made by various protesters. Some will make you laugh out loud, whereas others will increase your respect for them.
Art Installations Photo via k721102
As we can see, Taiwanese people are talented. Hone your craft and stand up for what you believe in, but respect others at the same time, and always be open to communicate.
Feature Photo via 楊子磊