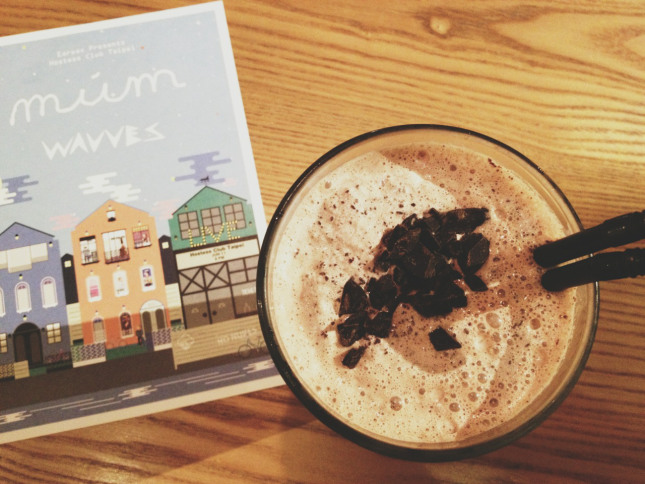 I’ve discovered a lot of cafes this year—some new, some old. Here are my top 7 favorite drinks in Taipei.

This is one of my favorite milkshakes (NT$180, pictured above) from just about anywhere, and that includes Shake Shack’s concreations. It’s not too sweet, and the dark chocolate chunks add the perfect crunch. Frothy and semisolid, it’s still much thinner than a concreation. Duomo used to offer a cocktail called the Chocolate Monkey, which was basically the same thing except with alcohol and banana slices. See more photos of the interior and menu from Duomo.

Tip: Duomo also offers a fantastic brunch; see what they have and what some of our other top brunch picks are.

For a good latte, Cama can’t be beat. Again, they aren’t over-sugared, and delivers a nice caffeine kick. Lattes come in regular, hazelnut, vanilla, and almond. My favorite is a toss-up between the vanilla and almond. Maybe I lean a little toward the almond. I’ve had some productive writing sessions while powered up on a Cama latte. (Hot and cold are both NT$70.) See the list of Cama locations HERE.

This year I’ve tried green tea lattes/matchas from several different places. Escape Artist makes the best that I’ve found so far, bar none. It also comes with two pieces of biscotti. The hot version is better than the frozen one, in my opinion—the green tea flavor is stronger. Escape Artist is also one of my favorite places to work. (NT$150)

Smith & Hsu has so many delicious-sounding tea flavors. I’ve only tried three teas at Smith & Hsu, all of which lived up to the promise of their names. Of them, my favorite is the black chocolate mint tea—it smells and tastes just like mint chocolate chip ice cream. I love it so much, I find it hard to make myself try new flavors when I revisit. The perfect place for afternoon tea, making a reservation is recommended. (NT$200 for a pot or a minimum order of NT$145 per customer.)

Marché is also a terrific place to work—I love the windows, the decor, and the airy/open feel to it—though it’s also a very popular spot so it can get crowded and noisy, as far as ideal working cafes go. (NT$65 if you take your drink there, or NT$40 to go.)

The cappuccino at Relax makes this list because it comes paired with a the Burnt Caramel Praline truffle: “This truffle features a strong caramel inside and sea-salt flaked outside, which combine to cut through the milk content of the cappuccino.” All of their coffee drinks are paired with a scrumptious chocolate, which makes for a terrific treat, and it’s the sweets that steal the spotlight here, with the coffee as a sideshow.

Tip: Hidden behind Relax is a secret, speakeasy-style bar—check it our here.

The scoop of green tea ice cream is what makes this awesome. Cha For Tea unfortunately closed their location closest to me, so I rarely get this one anymore. Still, when I get the chance to stop by, this is always my drink of choice. (NT120/NT160 for a medium/large, though I’m not exact on the price because I usually get it as part of a set meal.) See the list of locations HERE.

Have you tried any of these? What are your favorite cafe drinks?