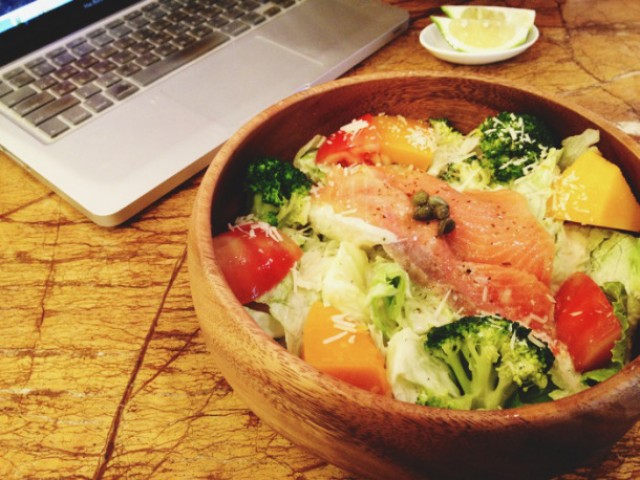 Stuffing yourself full of starchy foods at lunchtime is not always the best idea. By the afternoon, you’re left feeling bloated and sleepy. So what’s healthy, big enough in portion to keep you going for the afternoon/night, and doesn’t break the bank? Light Cafe, with locations in Gongguan and Shida, might just be the answer. I’ve always walked by the Gongguan branch and admired the sleek interior, but it was always lunch rush hour; the place always packed to the rafters. However, I took the opportunity of sneaking into the Shida branch several times before the word got out (and it started getting packed out at lunchtime!)–and was very impressed.

It’s not the most…cozy interior, but I like it’s simplicity; the geometric lights (casting pretty shadows on the ceiling!) and chairs. The design is perfect for summer weather. However, rainy or cold days might not make this space too pleasant to sit in (and as pretty as those chairs look, they’re hardly comfortable).

I must say something about the service at the Shida branch: it was phenomenal. Although they were quite understaffed when my mother & I visited for the first time (black-clad waiters rushing around like mad), the store manager was beyond anything I’ve ever experienced in terms of cafe service in Taiwan (and considering service is excellent 90% of the time, that’s really saying something!) The most heart-melting moment was seeing him step outside to neatly roll up & organize the mess of umbrellas outside (it was a rainy day, so there were about a 3484983 umbrellas on the steps).

People! RUN, don’t walk! for the salads. They are phenomenally priced (~160NT for a chicken caesar salad) and they are massive. They’re served in huge wooden bowls, and in addition to chicken, they have pumpkin, salmon and mushroom-topped salads. But ask for the dressing on the side; & make sure you specify that you want your salad water-free! A few times I’ve reached the end of my salad to find it totally soggy from un-removed water — not fun!

Less than 180 NT for a huge salad, and a cafe atmosphere! Not surprisingly, Light Cafe has become my new lunch obsession. However, if you’re not interested in salads (but…why?)–then Light Cafe pales in comparison to other cafes around the area. There are noset menus (even for lunch!) so essentially everything is a la carte. At around 150-200NT for a sandwich and 100-150NT for a drink (I think their lattes are around 130NT, Americanos 100NT)–it all adds up quickly.

However, their lattes come with cookies (another cue from Coffee Alley) and they were very gracious in honoring my request to make my cappuccino ‘extra, extra, extra hot’. The sandwiches are pretty average and I probably wouldn’t order one again. As for the desserts, I’m not a fan of fruity waffles/toast; but I saw tons of people ordering them, so I’m sure their versions are decent for a girl’s afternoon tea session.

I haven’t yet tried Light Cafe’s take-out but hopefully they’ll be just as good as in-store…and I’ll have to convince them to sell me one of those cute wooden bowls. Stephanie Hsu (Taipei, Taiwan) currently steps lively on the streets of Taipei finishing her undergraduate studies at National Taiwan University. After having had many an adventure on the streets of New York, Los Angeles, and Kansas City, she happily left it all behind for Taiwan, where she falls in love with each leafy lane & cute cafe. She started her blog, ‘Good Day, Taipei‘–to document it all. Her favorite area of Taipei is Yongkang St., and after a year of night-marketing, she’s finally accepted the love of stinky tofu in her life. Find Stephanie & her tales of Taiwan travel on Good Day, Taipei.