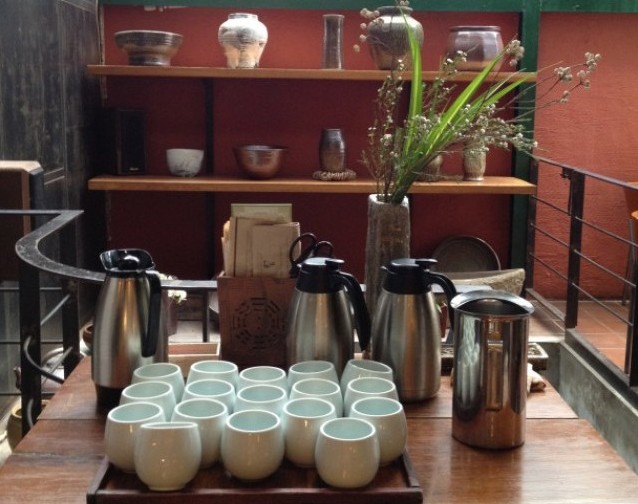 A version of this post originally appeared on Good Day Taipei.

I spent a rather lovely afternoon on Friday ignoring all the various errands I had to do in favor of relaxing, eating a delicious vegetarian quiche and sipping tea at a Hui Liu, a delightful little tea-house near Yongkang St. No one can accuse me of having my priorities mixed up, right? Not when the place I’ve chosen to play “hooky” is so darn beautiful.

Opened by a Taiwanese woman and her American husband, Hui Liu sells various teas and tea accessories in addition to being a vegetarian cafe. Organic, freshly baked bread was also available for sale. The shop seems to represent & promote an entire lifestyle rather than just a simple experience that you enter and leave.

Bags of tea and customers enjoying the afternoon filled the sunlit space. The perfect place for having a lazy chat with a friend, and that’s exactly what I did with a friend of mine who just returned from a trip away.

The entrees at Hui Liu can hardly be called cheap: my quiche set, which included a generous slice of quiche and two boiled vegetable sides, along with soup (a wonderful borscht), salad, dessert and tea rang in at 430NT (around 13 USD).

My friend ordered the Cold Sesame Noodle a la carte (around 300NT). It was absolutely delicious: with fresh made noodles thicker than the noodles usually used in 麻醬麵 (sesame noodles) and a big handful of organic sprouts on top.

After eating, we browsed the shop for a bit, smelling the fresh baked bread, admiring the teapots, and just feeling the calm that pervades the entire place; the calm found in everything from the warm glow of sunlight caressing the teapots primly sitting on shelves to the waving of leaves in the park outside. What a good afternoon.

Stephanie Hsu (Taipei, Taiwan) currently steps lively on the streets of Taipei finishing her undergraduate studies at National Taiwan University. After having had many an adventure on the streets of New York, Los Angeles, and Kansas City, she happily left it all behind for Taiwan, where she falls in love with each leafy lane & cute cafe. She started her blog, ‘Good Day, Taipei‘–to document it all. Her favorite area of Taipei is Yongkang St., and after a year of night-marketing, she’s finally accepted the love of stinky tofu in her life. Find Stephanie & her tales of Taiwan travel on Good Day, Taipei.