Eat Well at Eat Together Buffet 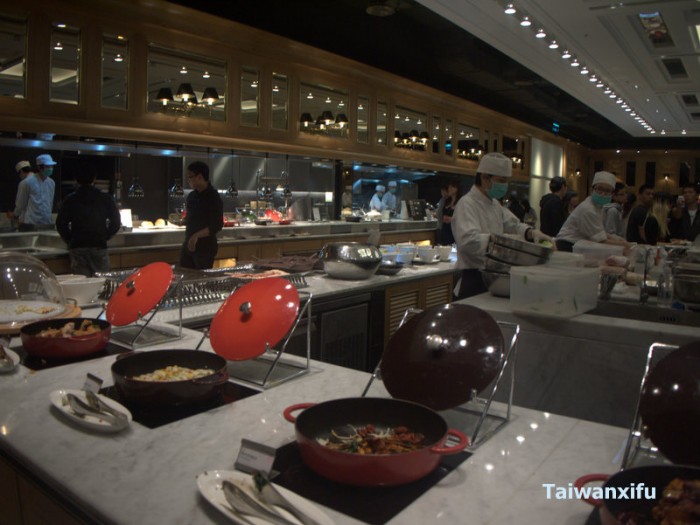 A version of this post originally appeared on Taiwanxifu.

I love a good buffet. There is excitement in the endless possibilities, wonder at the beautifully presented dishes of fresh food, and longing to sample everything. But some buffets can be a bit, well, pedestrian: good at first glance but quickly disappointing once you realize they largely contain mounds of cheap processed foods. But not this buffet — Eat Together is a tasteful and fresh Asian-style buffet experience, at a very good value. The only downside? Having to fight the crowds during busy times, such as holidays.

Eat Together (饗食天堂) is a buffet chain of six restaurants throughout Taiwan.  We dined at their large and spacious venue in ATT4Fun. Although the roomy venue was well-proportioned, it was doing brisk business when we visited over Chinese New Year. The main buffet area was laid out as a series of marble bench top rectangles, with chefs standing behind to constantly replenish the abundance of food and to create select dishes to order. The effect was homey; I almost felt like I was in someone’s kitchen, except for the troves of hardworking, face-masked chefs anxious to please. There is a certain art to the buffet meal. Most people progress in the usual order:  sashimi/appetizers first, then onto roasted meats and other specialty items, finished off with ice-cream then dessert and coffee. So what were the stand-out, specialty dishes at Eat Together? Well, the beauty of a buffet is that everyone can choose whatever they like to eat. As soon as I started on the buffet circuit, my eyes were immediately drawn to a series of delicate Asian-style seafood entrees. The orange juice marinated scallops were especially delicious. The entrée selection of tuna with salmon roe was also lovely, and set the right note for the rest of the buffet experience. At the sashimi station, one chef created fresh seaweed sushi cones on demand. Three quarters of the way through our buffet, I noticed a large line beginning to form at one of the stations. A team of chefs was skilfully preparing plate after plate of a modern sushi trifecta consisting of grilled beef, prawn and some type of yellow fish roe. Then a staff member appeared at our table asking us to pay our meal charge in advance. I was somewhat surprised that they would not wait until we finished, but I guess with a full restaurant of 344 people there would be a stampede if everyone hit the cashier at once.  Once we paid (in cash), he gave us coupons that we could use to redeem for this modern sushi dish. And of course, because you get the voucher that only allows you a limit of one serve, everyone wants one. In a feeble attempt to be healthy, I avoided these crispy jumbo tempura prawns.  But I noticed many people walking around with heaped plates (and I mean heaped up to the point of ridiculousness) – the only seeming exception to people totally overindulging.  So I assumed they must be really, really good. Instead I made an attempt to sample some Western-style dishes that aren’t as easy to come across in Taiwan. The paella was good, but not brilliant.  There was plenty of fresh seafood, but the rice was overcooked (as per the more usual Taiwan preference for soft rice). As far as I could see I was the only ‘lao wai’ Westerner in the restaurant, so I guess they could be forgiven for catering to local tastes.

These puff-pastry covered soup were difficult to find at first, and when I finally spotted them I realized why — they were baked in batches, and demand quickly exceeded supply. Thankfully they were baking lots and lots to keep up. This baked pumpkin with cranberry dish was colourful and a nice contrast to some of the other Western style dishes. Desserts — ahhhh, I could write a whole section on this. From an immaculately presented glass display case filled with a tempting array of chocolate, cheese and sponge/fruit cakes to the interesting apricot and carrot cake with lemon icing to the freshly-baked biscuits next to the coffee machine, Eat Together definitely doesn’t skimp on desserts. Oh and let’s not forget the self-serve ice-cream and the cold-stone style freshly mixed ice-cream. And of course all the tropical fruit you can eat.
Pricing: see table below.

About the guest writer:

Serina is an Australian who blogs about food, travel and culture under the pen name ‘Taiwanxifu’ (Taiwan daughter-in-law). Read more on her blog Taiwanxifu.