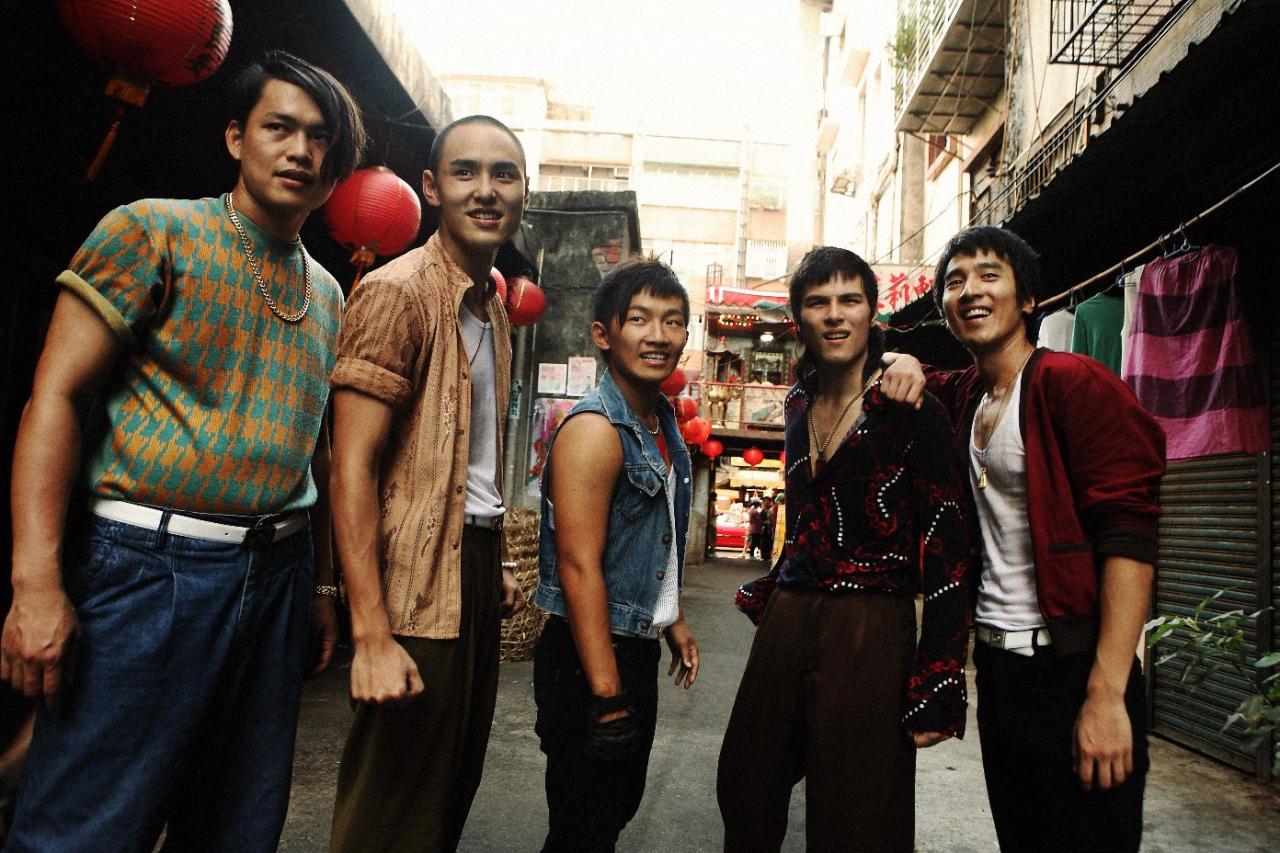 In the last five years, Taiwan’s film industry has experienced a golden period. Partially spurred by the recent Taiwanese pride movement, which stresses the importance of local culture and homegrown products, Taiwan’s native movies are now worthy competitors to any made-in-Hollywood big budget blockbuster. With local films now being exported to markets like Singapore, Hong Kong, Japan and even the United States, the Taiwanese movie industry is certainly one to watch, and for those who have yet to experience a Taiwanese film, here are some of our picks from the last few years to get you started.

When going down this list, keep in mind that we chose films produced in 2008 and onwards, since that’s the year that sparked Taiwan’s recent movie renaissance. Taiwanese cinema certainly existed before then, and we would be remiss to ignore the importance of classics like Hou Hsiao-Hsien’s A City of Sadness (悲情城市, 1989), a historical movie that focuses on the lives of a family caught in the throes of Taiwan’s White Terror movement. But for those that may be unfamiliar with Taiwanese cinema, we opted to give you a taste of some more contemporary picks. Once you’ve watched the ones on this list, however, we do urge you to seek out the classics too!

So how did we make our selections? Some of the criteria we used included: Does the movie tell a story that represents an aspect of Taiwanese culture? After watching it, will it give the uninitiated viewer who’s never been to Taiwan a good idea of what the island is like? And lastly, is it an entertaining film? We just hope you’ll agree. So, without further ado, let’s begin. 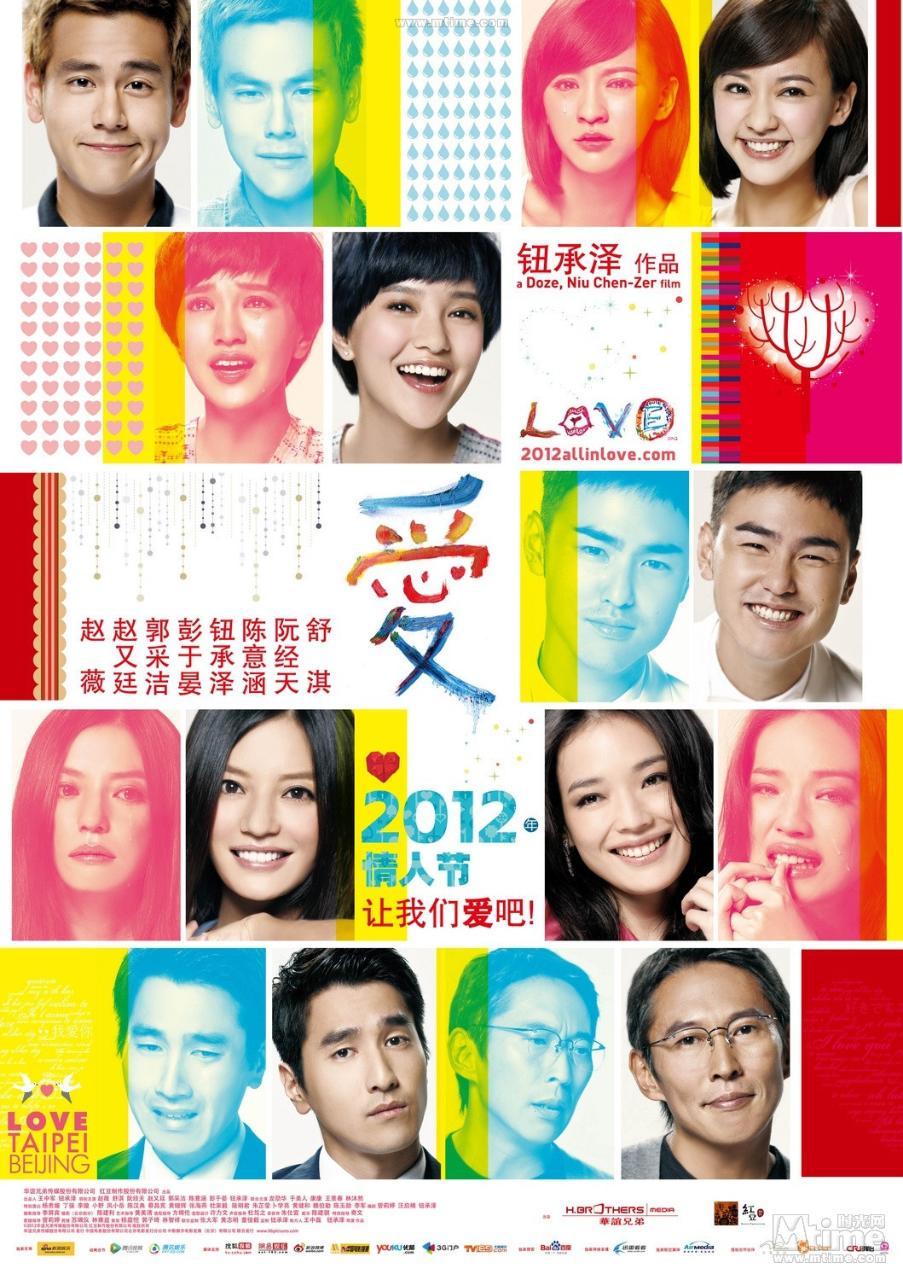 Love is Taiwan’s version of Love Actually, a feel-good flick focusing on the stories of multiple characters, all looking for romance and all intertwined through their relationships. With its ensemble cast of big names like Amber Kuo, Ethan Juan (two of Taiwan’s most famous stars) and Zhao Wei (an award-winning Mainland Chinese actress), Love is basically a who’s who of Chinese cinema. The story is nicely crafted and moving as well, and one of the vignettes deals with an issue uniquely Taiwanese: a businessman from Taiwan, played by Taiwanese-Canadian actor Mark Chao, goes to Beijing for work. He runs into a Mainland woman, played by Zhao Wei, and despite initial prejudices against each other’s backgrounds, the two eventually begin to fall in love. Who would’ve thought that a romantic movie could tackle an issue like cross-strait relations? Love, which was a huge success in both Taiwan’s local market and mainland China, does just that.

Fun Fact: Love is the second smash film by director Doze Niu, who has established himself at the forefront of Taiwan’s movie scene within the last few years. Another big film of his chimes in at number three on this list, and stars several of the same actors that feature in Love, including Mark Chao and Ethan Juan. 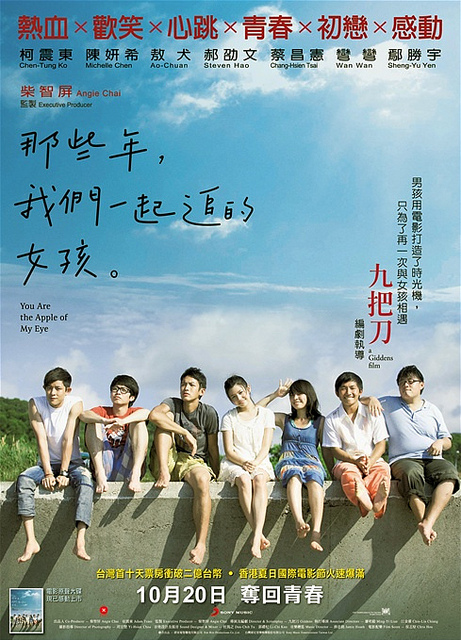 You Are The Apple Of My Eye set box office records in Taiwan, Hong Kong and Singapore, and even made a big splash at the New York Asian Film Festival. All for good reason–this is an often touching, sometimes hilarious coming-of-age tale of several boys growing up in Changhua, Taiwan. These kids all end up chasing after one girl named Shen Chai-Yi, the honors student of their high school class, and the movie chronicles their experiences as they compete for her affection. As they graduate from high school, move on to university and then their separate ways in life, the boys never forget the girl they loved, and this common memory ties their friendship together for life. You Are The Apple Of My Eye became extraordinarily popular in Taiwan simply because it’s an accurate representation of the life of an average Taiwanese student, complete with all the happiness, laughter and heartbreak that we face on the path of adolescence.

Fun Fact: This was director and author Giddens Ko’s film debut, and he also wrote the book of the same name that the movie was based on. Although there’s currently no English translation of the book version of You Are The Apple Of My Eye, you can easily find the novel in any Taiwanese bookstore. For students of Chinese, it’s a recommended read, and you’ll learn a lot of funny slang in the process. 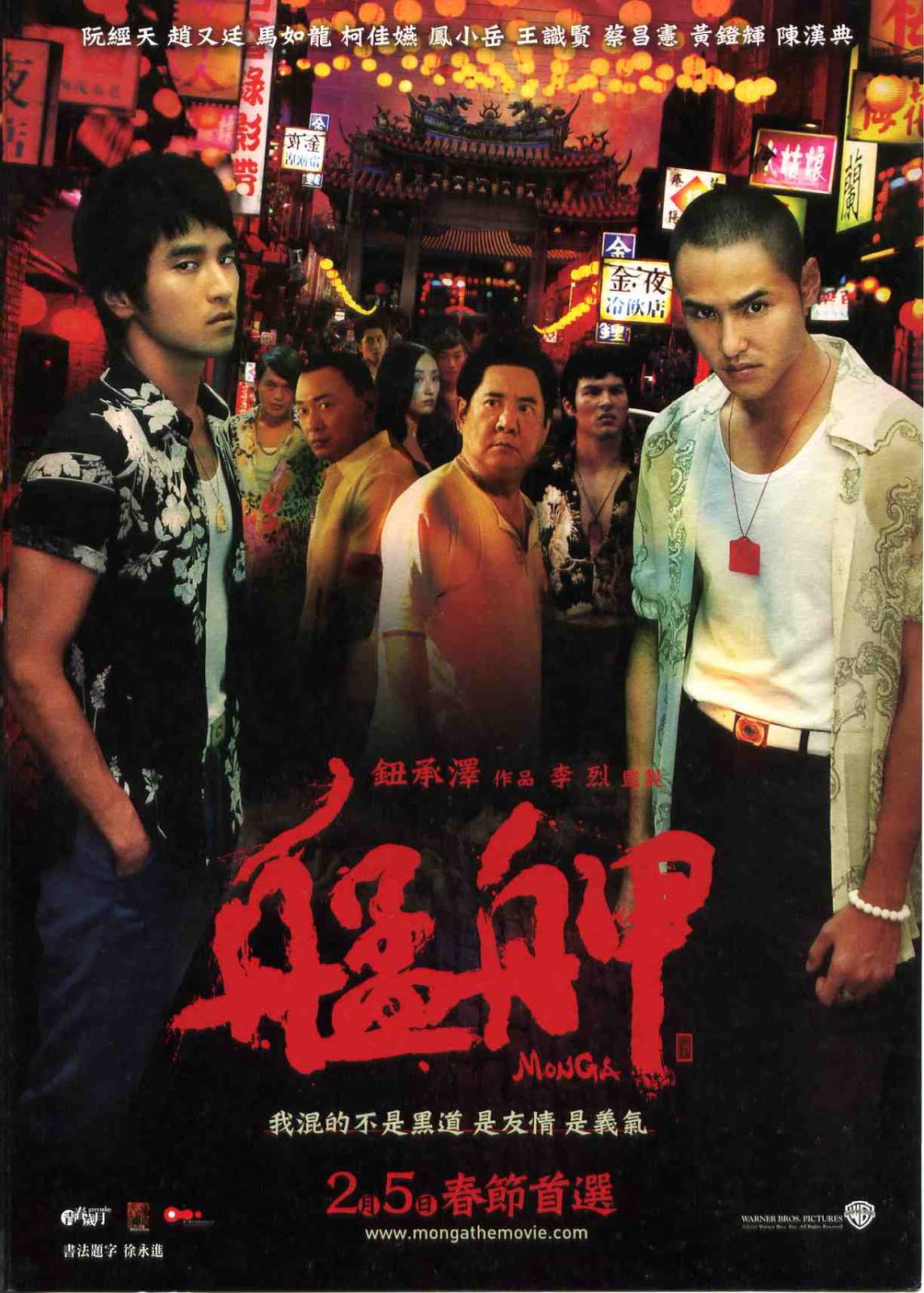 This tale of 1980’s Taiwan gangsters was director Doze Niu’s first smash hit, and ended up beating Hollywood blockbuster Avatar at the Taiwanese box office during its first week of release. Like any good gangster movie, Monga absorbs the viewer into the lives of its characters–young thugs growing up in the Wanhua district of Taipei–and provides an engrossing look into the territorial claims, violence and brotherhood that encompasses the Taiwanese underworld. Unlike Hong Kong cinema, which has poured out dozens of gangster movies over the decades, Taiwan has yet to contribute many worthwhile films to this genre. Monga, however, is an exception, and provides top-notch crimeland entertainment that’s sure to leave you with a new impression of the seedier side of Formosa.

Fun Fact: Monga was filmed on location in Taipei, and residents of Taiwan’s biggest city will recognize many famous landmarks in the film. Keep your eyes peeled for Snake Alley, Longshan Temple and Qingshui Temple. The settings may be masked so they look more fitting for the 1980’s time period, but those familiar with Taipei’s streets should definitely still be able to recognize these locations, all of which received a boost in tourism after the movie’s release. 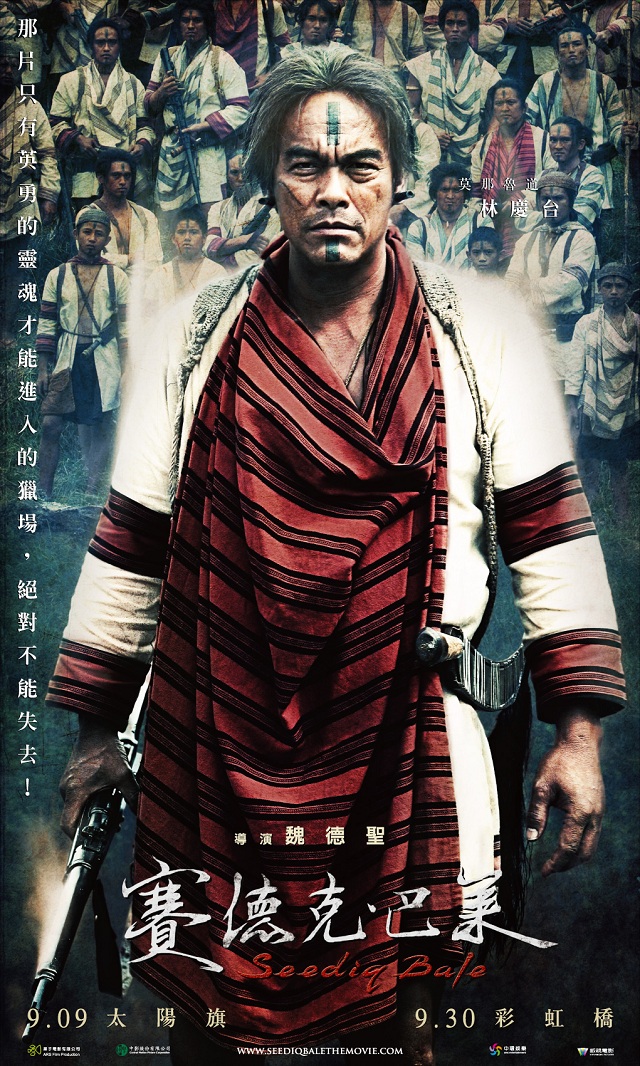 Warriors Of The Rainbow: Seediq Bale is the most expensive Taiwanese movie to ever be produced, a sprawling historical epic in two parts that can be mentioned in the same sentence as  Braveheart. Detailing the Wushe Incident that occurred in central Taiwan in the 1930’s, this film explains how the Seediq aborigine tribe organized an uprising against the Japanese, who at that time were the colonizers of Taiwan. Filled with beautiful cinematography and a Japanese and Taiwanese cast, this monumental production is truly a sight to behold. Be prepared for a long, sometimes graphic watch–the total running time of the film’s both parts is over four hours, and there are several lengthy battles that involve Seediq fighters beheading Japanese soldiers. But fans of historical dramas and students of Taiwanese history will definitely want to see this one.

Fun Fact: This may be a film about Taiwan, but don’t expect to hear any Mandarin spoken throughout the movie’s long runtime. The language predominantly spoken is that of the Seediq aboriginal people, and many of the actors had to learn parts of the language specifically for this film. Japanese is also heavily used, and there are a few tiny bits that feature the Taiwanese dialect. 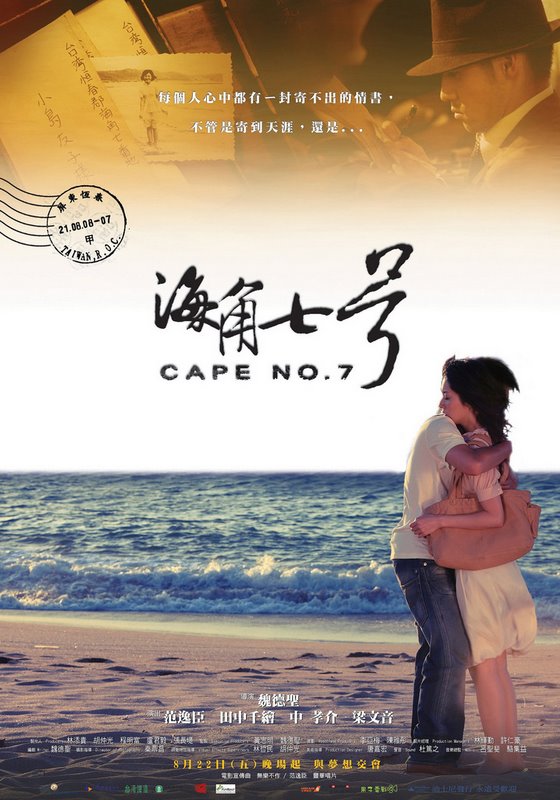 This is the film that invigorated the Taiwanese movie industry, eventually becoming the island’s second top grossing film in history, only behind Titanic. On the surface, it’s a deceptively simple making-the-band story about a ragtag group of musicians that come together to promote the southern town of Hengchun. The tale goes much deeper, however, when one of the band members, Aga (played by singer Van Fan) comes into possession of a series of old love letters. These letters, written by an unnamed Japanese teacher who fell in love with a local girl during Taiwan’s colonial past, have never been delivered. Aga takes it upon himself to find the letters’ recipient, and as he ends up falling for his Japanese band manager (played by Chie Tanaka), his own love story mirrors that of the one spoken of in the letters, forging a poetic link between Taiwan’s present and its past. Showcasing southern Taiwan at its finest, Cape No. 7 is filled with the Taiwanese dialect, montages of Taiwan’s old days as the first colony of Imperial Japan and a beautiful soundtrack, all of which come together to create a movie that is uniquely a product of Formosa. For that reason, it lives up to the hype, and makes our number one choice on this list.

Fun Fact: Both Cape No. 7 and Warriors Of The Rainbow: Seediq Bale were directed by the same man, Wei Te-Sheng. Now one of the top directors of Taiwan, Wei Te-Sheng originally wanted to make Warriors Of The Rainbow: Seediq Bale first, but lacked the funds for such a film. The success of Cape No. 7  finally gave him the money he needed to produce his historical epic.

That’s our list! There are many other great movies out there that didn’t quite make the cut, but keep in mind that this list is ultimately just a series of suggestions to introduce viewers to the great world of local Taiwanese films. Once you’ve finished watching our picks, do a little bit of research, take the jump and make your own selection of favorites–and be sure to write in the comments to let us know what your personal top five are!

Feature image of Cape No. 7 courtesy of Cinespect.com