Food Done Right at Beijing Do It True 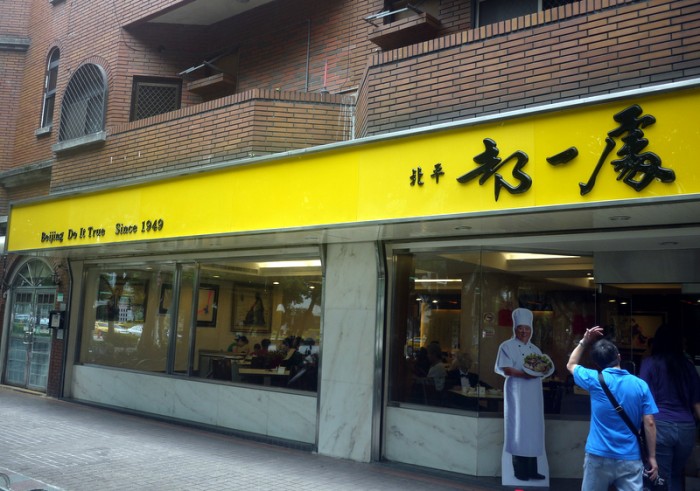 Beijing Do it True, known also by its oddly rhyming Chinese name beiping dou yichu (北平都一處) is one of the few remaining restaurants in Taiwan that continues the legacy of post-civil war mainland Chinese cuisine. As its bright yellow sign announces, Beijing Do It True was first established in 1949, and it continues to serve up robust, authentic style Beijing food. It proudly proclaims itself as a mecca for visiting politicians and celebrities, including the 1994 visit of former U.S. President George Bush (senior) and Hong Kong movie star Jackie Chan.

One of the first things that greets you as you walk in is the glass display case with mounds of sesame buns (芝麻醬燒餅, NT$40 each, cutely misspelled as ‘bums’ in the English menu) and stainless-steel trays of thick stewed pork belly covered in its black, gelatinous stewing sauce (醬肉, NT$160). The sesame buns are dense, sesame-paste orbs designed to serve as an accompaniment for the glistening stewed pork belly. Top with a dollop of the solidified stewing liquid, and you have a cholesterol inducing snack that elicits pure bliss in a way that only pork belly can.

Another item on display at the entrance are stacks of cooked chickens. Don’t confuse this for simple BBQ chicken; these are pine-smoked chicken (松子燻雞, NT$270). The delicate flavor of the smoked skin accentuates and brings out the chicken flavor, and the skin was slightly crispy. I was a bit surprised, though, that the restaurant did not feature the usual Beijing delicacy of duck.  But having tried the pine-smoked chicken, I thought it just as good if not better.

On the strong recommendation of the waitress, we ordered pan-fried dumplings (褡褳火燒 dālián huǒshāo, NT$200 for four). Around three or four times the size of usual pan-fried dumplings, they were like giants’ fingers filled with whole prawns, pork mince and leek. Fried in fat, they were crispy and incredibly good.

For the younger members of our table, we ordered a serving of sweet and sour pork tenderloin (糖醋里肌 NT 380). I had expected good things of this restaurant staple, but I thought this missed the mark. The batter was too thick and oily, and the sauce too thick and sweet. It tasted as if it had been crafted for the Western diner unfamiliar with the delights of authentic Chinese food, which perhaps was its target audience.

In terms of authentic dishes, one of my favorite dishes – somewhat  surprisingly to this previously avowed offal eater – was the stewed intestines (九轉肥腸, NT$480). This dish of stewed intestines was delightfully tender, so soft it just melted in the mouth. It was covered by a slightly sweet, salty sauce that masked any offally flavor. If you didn’t know it was offal it could definitely pass as chicken.
More popular with the younger set was the dish of deep fried meatballs (炸丸子, NT$380). I liked how they were served with a mixture of silk-road style spices, but thought they were over-fried and too dry.

On a healthier note, I enjoyed the seasonal peach and honey smoothie (水蜜桃奶昔). This was prepared with lots of ice, so tasted more like an ice-cream slushie than a smoothie. The peach and honey blend was nicely balanced, and although I thought this was an odd choice to accompany a heavy northern Chinese meal, I savored every drop. Others at the table indulged in Beijing Do It True’s signature sour plum drink (酸梅湯, NT$160 a bottle), which balanced strong sweet and sour notes.

Our plate of steamed vegetable dumplings (花素蒸餃, NT$140) reminded me of my student days in Beijing. There is something about northern-style dumplings that are different from those in Taipei.  I think it is the slightly thicker ‘skin’, and the way they are folded.
One of our alumni members was vegetarian, and felt a little underwhelmed by the choices available.  So we ordered an additional two noodle dishes — a dish of cold sesame noodles (麻醬麵, NT$160) and spicy noodles (炸醬麵, NT$160).  The waitress did not approve of our choice; she thought we should have ordered steamed fish instead.  And perhaps she was right because the sesame noodles were disappointingly ordinary, topped with a bland sauce that cried out for soy sauce.

Our soup dish was a hearty, hot-pot style sour cabbage and pork meat soup (酸菜白肉湯 NT 400). Although probably more suited to an icy Beijing winter, I liked the way the slight sourness of the pickled cabbage contrasted with the frozen tofu in the soup.  I didn’t like the thinly-sliced fatty pork meat as much, despite it being typical of northern-Chinese hot-pot style dishes.

Yet there was still one formidable dish to come.  I had almost forgotten that we had ordered scallion pancake (蔥油餅, NT$800).  One of our friends had suggested that it be cut into twelve slices on account of its thickness.  And when the giant, super-sized disc arrived I understood what she meant.  It looked just like a pizza only much, much bigger.  And even with our large table of hungry eaters, we struggled to even make a dent in it. Definitely not something to order during an intimate meal for two.

Beijing Do It True is located directly opposite the Sun Yat-sen Memorial, within a short walking distance of the Taipei City Hall. Its bright yellow sign is hard to miss.

About the guest writer:

Serina is an Australian who blogs about food, travel and culture under the pen name ‘Taiwanxifu’ (Taiwan daughter-in-law). Read more on her blog TaiwanXifu.