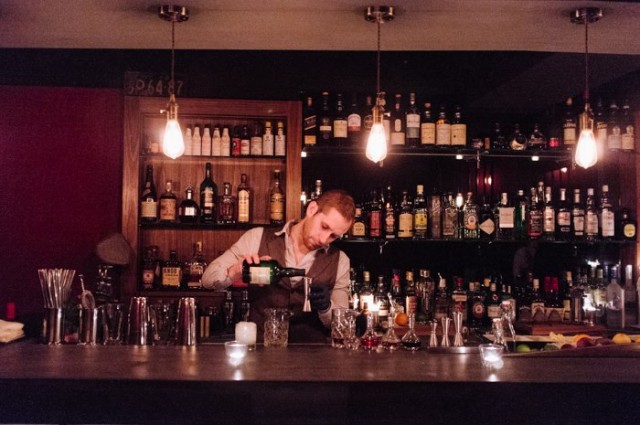 It’s a good night for a drink (and let’s face it, when is it not?), especially on these rainy winter evenings of late. One wants a quiet atmosphere, the clinking of bottles or glasses, some friends, some conversation.

There’s an espresso bar in an alley off of Dunhua S. Rd that just might fit the bill.

From the outside, R/X (Relax Espresso) is clean, modern space fitted in a “drink and dash” coffee bar as opposed to the afternoon tea-catering cafes so popular in Taipei. Each coffee drink at Relax is made with beans sourced from NYC espresso bar FIKA, and the price includes an accompanying bite of chocolate made by fine chocolatier Håkan Mårtensson. Though the prices are obviously higher than one would expect at other Taiwanese to-go coffee options (ranging from 90NT for espresso and 140NT for a latte), Dante and Ikari don’t give you options like Espresso paired with Espresso Ganache (chocolate). And they sure don’t take it upon themselves to inform you that “when you eat an ‘Almond Gianduja’ with their latte, the salt in the chocolate and nut truffle balances well with the milk in the latte.” What now, Starbucks?

In addition to providing a space where customers can stop for an espresso fix, Relax also serves light set meals that are written up on the large chalkboard wall and rotate weekly. We saw encouraging options of warming winter soups and guacamole chicken wraps; sets ring in at a reasonable 200NT. Now, if all the talk of coffee and chocolate haven’t yet addled your mind, you might be thinking: Weren’t we just talking about a stiff drink or two? Why are we talking about espresso?

The answer lies behind (and literally behind) the fact that Relax: The Espresso Place is more than an espresso place. It is, in fact, the clever front for Ounce, Taipei’s newest (and might we venture to say only?) secret, speakeasy-style bar.

Managing partner Yee, who moved back to Taipei from the states to open Ounce, was first living living in NYC when a friend took him to PDT (Please Don’t Tell), a famous NYC “secret bar”.

“The shots, beers, bottles—after a while, you’re looking for something different,” explained Yee. “I was intrigued when I started seeing these bars that were working to replicate the same spirit of the speakeasy establishments of old. They were so unique: for example, PDT is hidden inside a hotdog stand; and inside, here’s this bar focused on great service and craftsmanship.”

Self-described “cocktail-seeker” Yee started working his way through the network of speakeasy establishments in NYC before deciding with some other partners to open up their own establishment in Taipei. Ounce Taipei opened on November 6th with an aim of bringing “a modern rendition of the speakeasy concept” to the city and educating Taipei on the art of the “craft cocktail,” a drink crafted to each individual customer’s taste. Though we won’t divulge details of how we found ourselves sitting inside of Ounce on a Wednesday night (it’s part of the secret, after all), we will say that we reserved our seats on the Ounce website beforehand, made our way to Relax, and started from there. The interior of Ounce is dim, quiet, intimate. Though the space is fairly spare, eyes are immediately drawn to the large collection of bottles lining the wall behind the bar, most of which can’t be found anywhere in Taiwan. But how did you get them, we ask. We only get a smirk in reply – just another secret that Ounce keeps to spin their magic. The main magic behind a bar lies, naturally, in the man behind the counter. The man behind Ounce’s counter, Lee Peare, is more deserving of the title “mixologist” than the term “bartender”. He’s no good-natured old proprietor wiping up behind you with a rag, nor a wannabe model pouring drinks in record fashion. He’s here to tell you what to drink, and how to drink it.

We practically had to fight with him to make us a mojito (we recommend that you don’t ask, either), and even then, it came with conditions. “Don’t stir it,” he commands when he hands me a beauty of a mojito with a metal spoon tucked inside. “Just drink it, it won’t be like any mojito you’ve ever had.”

Commitment to quality and craftsmanship is Ounce’s unwavering stance; you’ll find no hastily sloshed drinks or over-the-top garnishes in this establishment: everything is precisely measured, carefully poured, and masterfully mixed. Our mojito? Let’s just say that we’ve been ruined for any other version but Ounce’s. Equally flawless was the other drink he handed us, a concoction that included rose water, elderflower liqueur, egg whites (for the foam, we’re told by Peare) and…gin. We hate gin, we don’t touch the stuff. But the award-winning Peare could probably spin an amazing cocktail from bathwater, and we’d drink it. “That’s part of the whole experience,” explains Yee. “These mixologists take something you think you don’t like and make it into something quality, something you’ll be surprised to find yourself enjoying.” Though we recommend you speak to Lee and let him sort your drink out, for those who find comfort in menus, we’ve discovered that the Bourbon Blossom and the Zubrowka & Elderflower Martini are popular. Price points are conspicuously absent, but know that you’ll be paying roughly around 400NT per drink.

Reservations are typically needed, with a maximum of  around 30 seats a night, as Ounce’s aim is to keep the environment quiet and relaxed. “In the speakeasies of the 1920s, friendships were forged over clandestine meetings, shared secrets, and flowing drinks,” their online manifesto claims.

Well, here’s a secret from us to you, Taipei–though we can guarantee neither Relax or Ounce will be a secret for long.

Great article, Stephanie, and really spot on with my experience at Relax and Ounce, too! I love Relax and plan to return to Ounce with some visiting friends soon. The food looks and sounds great—I haven’t tried any real eats there yet besides chocolate, but now I’m excited to try it.