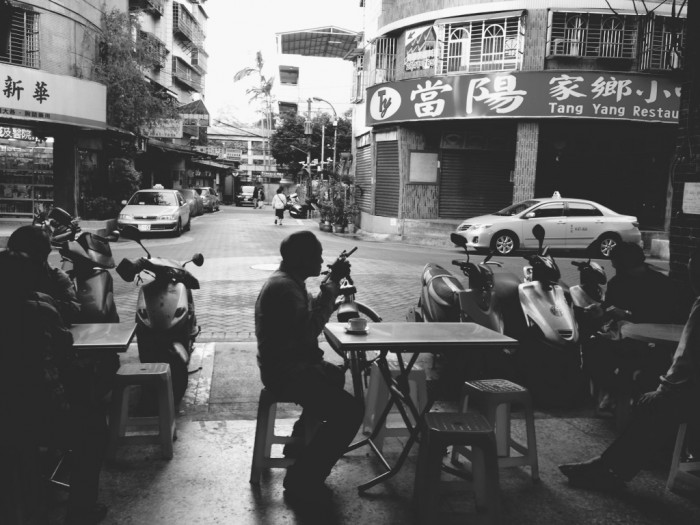 As the weather gets colder by the day, the farthest thing from our mind is a vacation. Memories of summer’s explorations and adventures fade fast in the wake of fall busyness; Chinese New Year break seems farther away than ever. So what are you to do when a plane ride away from Taipei doesn’t exactly fit into your schedule? Take a vacation within Taipei, of course: thanks to the thousands of Han Chinese Burmese that have made their home in Taiwan in the past decade, Myanmar (formerly named Burma) is only an MRT ride away. Just outside of Nanshijiao MRT, a cobble-stone lined street is home to grocery stores stocking exotic ingredients, simple little restaurants serving up cups of milky Indian tea, and clusters of old men lounging outside, chatting in Burmese. It’s all a part of your day trip to Myanmar – no visa required. A stone’s throw from Nanshijiao MRT lies another world, one created by the community of Burmese-Chinese immigrants (Taiwan’s largest) that have settled in Zhonghe. At the center of this community lies Huaxin Street, which signs indicate as the “Southeast Asian Food Street”. However, according to several shop owners we encountered, “It has really become known as Burmese Street.”  As one turns onto the street, Chinese signs gradually acquire rows of accompanying Burmese script: “Yunnanese, Thai, and Burmese” style, they read. Though only a few MRT stops away from Taipei City, Huaxin Street is a haven for Burmese-Chinese, who come here to gather with friends over a cup of milk tea, or chat in the  language of the “old country” around a table at one of the many inexpensive eateries dishing up authentic fare.

The street is at its liveliest during weekends, when the street takes the feel and hustle-bustle of a Southeast Asian street market. However, you’ll have to wake up early if you want to try a traditional Burmese breakfast – a flavorful broth of catfish, rice noodles, and banana stem. The vendor we encountered cutting banana stem (see below), opens shop at 5:30am in the morning to feed the Burmese-Chinese workforce that comes in ready to slurp a bowl of mohinga before starting the day. We stopped by one of the numerous little eateries to join the senior Burmese-Chinese population in sitting down at a rickety table for a cup of fragant, creamy Indian milk tea and an “Indian bing (bread)” smeared with butter and dipped in sugar. The owner explained that the bread, called paratha, had to be cooked in a special oven before serving and can also be eaten as a savory snack with beans. At roughly 50NT for both, it’s a thoroughly affordable version of Taiwan’s beloved afternoon tea. Aside from stalls selling a large range of Burmese-style noodles and a la carte dishes, curry offerings abound on Huaxin Street. We stopped by a store to pick up a “Indian-style curry”, which the friendly shop owner informed us was done in Burmese style: the beef stewed in a lighter (and extremely delicious) combination of spices compared to heavier traditional Indian curry; served up with flavorful biryani rice and a flavourful curry broth.

He sat with us while we ate our meal and graciously answered our questions regarding the culture of his home country (upon our inquiry, he informed us that Burmese like to eat noodle-based dishes in the morning, while preferring rice-based dishes at night; and yes, he adores Aung Sang Suu Kyi) and regaled us with tales of his life in Myanmar. Like many living and working near Huaxin Street, he grew up in Myanmar, but has now lived in Taiwan for more than 30 years. “If there’s anything that you need to know about the Burmese,” he chuckled “it’s that they are even more friendly than the famously warm Taiwanese.” And as if to prove his point, another Burmese man eating simply waved our wallets away when we tried to pay for our finished meals: “No need, no need,” he insisted. “It’s on me; a welcome from the Burmese community.” One can also find several grocery stores on Huaxin St, selling imported goods needed for authentic “Yunnanese, Thai, and Burmese” style cuisine. Cans of varying brands of coconut milk take up nearly two whole shelves, and we amused ourselves by counting the number of spicy sauces on sale, most of which we’ve never seen or tasted in Taiwan. Though we were full from our meal, we couldn’t resist walking away with some coconut jelly treats, a popular Burmese dessert. Whether as a weekend day-trip or a quick morning stop for some mohinga and a cup of sweet milk tea, Huaxin Street provides a rare chance to step into another world and another culture; a chance to be fascinated with sights, smells and sounds we’ve lived near side-by-side with in Taipei, but never encountered. How to Get There:

Take MRT to Nanshijiao and leave from Exit 4. Upon exiting the MRT, turn right until you pass the police station, turn left at the next stop-light onto Huaxin St.

I had no idea about this! Worth another trip to Taipei just to visit.

It definitely is, Linda! I had no idea about it either until I took a Southeast Asian arts class! Hope you can return soon to visit it!