What’s On Tap: The Only Real Pub in Taipei 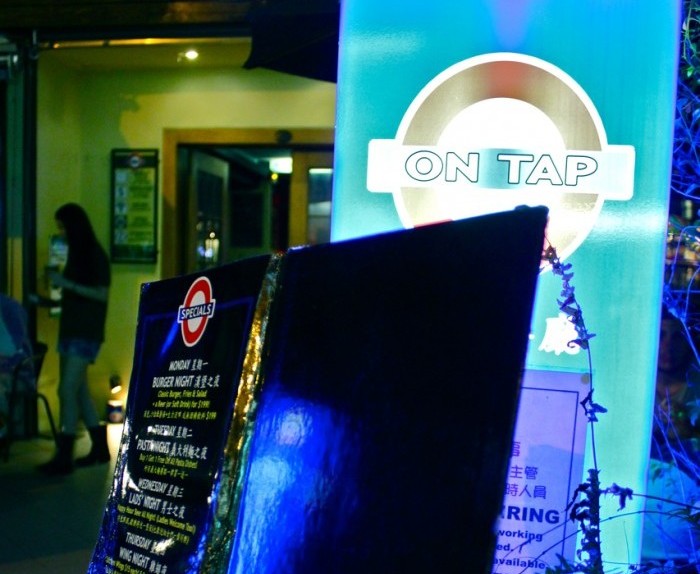 Now in its fourth year of business, On Tap markets itself as “the only real pub in Taipei,” boasting a comprehensive food and drinks menu. Both originally from England, owners Matt and Jason have lived in Taipei for over a decade and now consider it home. Of course, no home is complete without your favorite hang out spot, and when the two found themselves tiring of the usual lounges and nightclubs, they saw a void that needed to be filled. Thus, On Tap, a British style pub, inspired by their very own watering holes back in England, was born. What started as a small pub frequented mostly by Matt and Jason’s friends, quickly expanded, as curious locals became regulars. Business must have been good because On Tap is now in its second year at a new location, in the heart of the East District, just across the street from Luxy and less than a five minute walk from Ding Tai Fung – prime real estate to attract homesick ex-pats, locals, and tourists alike.

Though Matt and Jason initially intended to serve only alcohol and a few appetizers, catering to the football fans crowd looking to grab a drink and enjoy a game together, their business has grown into a restaurant as well, making food as important as the alcohol. In addition to your standard bar fare with Western-style entrees (burgers and pasta averaging 250 NTD, fries, and appetizers), On Tap features some rarer finds, including an impressive array of homemade meat pies, including Steak and Onion, Chicken and Mushroom, Lamb Shank, and Creamy Vegetable (prices range from 350 – 390 NTD) and quiches, including Bacon and Cheese and Spinach and Feta (averaging 350 NTD), that will appeal to any palate, English or not. The pies aren’t even listed on their menu because they are made fresh daily by Jason’s wife, a Taiwanese native who spent time abroad, refining her culinary skills in England and Russia. Of course, no pub would be complete without the alcohol. Matt and Jason gave me a breakdown of their drinks menu, explaining that it’s been difficult to find British beers in Taiwan. “Our selection is based on what’s popular, available, and what I like to drink,” Jason, the bigger drinker of the two, admits with a grin. That explains the cider selection, including Organic Pear (250 NTD for half a liter)  and Snakebite Royale (500 NTD for 2 pints), an anomaly in Taipei, but a staple of English pubs.

Another unique feature are the mixes of draft beers or ciders, like the Snakebite (Cider and Carlsberg for 210 NTD) or Crown Float (Guinness and Cider for 250 NTD); the ultimate beer lover can try the Magnificent 7 (280 NTD), which combines all seven drafts in one pint glass. The bar also offers creative cocktails and bombs (averaging 250 NTD), the latter being perfect for those hitting the clubs later in the evening and seeking an extra kick to last past the MRT closing time. Though the drinks aren’t cheap, the prices are on par with what bars in the neighborhood offer, and On Tap does have a 90 NTD Happy Hour from 5 pm – 8 pm on Mondays through Fridays. But in a city like Taipei, where it sometimes seems you can’t walk half a block without running into a restaurant or bar, what really sets On Tap apart, making it the pub to visit? Jason was quick to point out that the pub culture Matt and he strove to recreate wasn’t so much shaped by any one dish or drink, but rather the atmosphere.

“We’re not a place where you come to look good. We want people to eat, drink, hang out, and chat without any sort of pretension. It’s the kind of place that we would go to; that’s why we can be passionate about it,” said Matt. There certainly is a variety of ways one can enjoy their time at On Tap, as the pub has a towering Jenga that stands over 2 meters, a giant Connect4, numerous board games, and of course, pool and darts. On Tap also sponsors four local football teams and one baseball team. The only thing missing, probably, is the history that comes with true British pubs, many of which are centuries old. But for now, we’ll settle with saving on the cost of an international flight and spending our time at On Tap.

Photos via On Tap & Lizz Lee

Jeremy, we’ll need to find more places like these when you come back for your short visit!

love the photos! great write-up; the atmosphere sounds like what i’ve been looking for in Taipei.