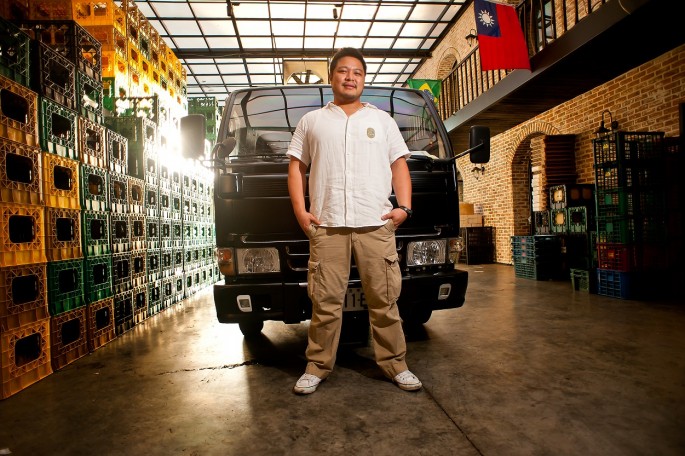 Quentin Yeh is devoted to his job as brewer-in-chief of Le Ble D’Or, one of Taiwan’s first microbreweries. Since launching the brand with his father in 2002 Yeh has gained 20 kilograms, in part from sampling three to four liters of beer every day at the company’s brewery in Sanchong. In addition to ensuring the quality of the 80 tons of beer brewed each month by Le Ble D’Or, Yeh has also supervised the company’s expansion to eight restaurants, including its newest location in Suzhou, China, and manages its 300 employees.

Quentin recently took time out of his busy schedule to share Le Ble D’Or’s signature longan honey lager and a giant platter of pork knuckles and German sausages with Taipei543. We asked him about the challenge of competing with Taiwan Beer’s stronghold on the local market, building the brand’s reputation and the best way to enjoy Le Ble D’Or’s lager. CATHERINE SHU, TAIPEI543: When you started, the selection of beer on the Taiwanese market was limited. Was it difficult to introduce different kinds of brews to consumers here?

QUENTIN YEH: A lot of people thought of Taiwan Beer as the only beer out there, so that was their standard for how beer should taste. But beer comes in hundreds of flavors and our wish was to get as many of those flavors as possible to customers.

We only had a small brewery at the beginning and we wanted to sell our beer to restaurants, but no one knew our brand. Everyone was serving either Heineken or Taiwan Beer. It wasn’t enough to tell people that microbrewery beer is better because it’s fresher. We had to market ourselves. Ads were pointless because people needed to sample our beer for themselves, but tastings were too time-consuming, so we decided to open our own restaurant. TAIPEI543: What makes your beer stand out?

YEH: We brew wheat beer and the quality of our malt is very important. We have to import it and then we carefully watch the air circulation and humidity in the storage area. The flavor really develops when you start roasting it, so we worked closely with our suppliers to learn how to do that properly.

Our honey lager is made with Taiwan longan honey. We developed it in 2007, five years after we started our company. Originally we’d wanted to associate our brand with German beer, since they make the best brews. But then I thought that if we want to grow, we couldn’t keep trying to be a European beer company. We have to add Taiwanese elements to our brand. So we started experimenting with local ingredients. We tried adding fruit and other things to our beer, but they didn’t work. We didn’t just want to add a flavoring that would not fully complement the taste of the lager. We tried several different types of honey—lychee, even apple—but when added to beer, the flavor disappeared. But longan honey has a very strong taste because longan flowers are so fragrant, so it worked.

TAIPEI543: How many flavors do you have on tap now?

YEH: We serve three lagers, including our dark and honey lagers. TAIPEI543: How do you want people to experience Le Ble D’Or’s beer when they go to your restaurants?

YEH: We suggest our honey lager to drink before your meal, because it is a bit sweet and sour. The regular lager pairs well with your meal because it won’t compete with the flavor of your food. Then afterward, when you have dessert, drink our dark lager, because the taste is richer. It’s like having a coffee after dinner.

TAIPEI543: What special edition flavors have you served in the past?

YEH: Last year we offered a “smoked” beer. We used smoked malt from Denmark. The manufacturing process was different, but it’s similar to how whiskey makers use smoke to add flavor. We used smoked malt and the beer tasted like liquid meat. It had a salty aroma, but it wasn’t salted at all.

Last year we also worked with Black As Chocolate to make chocolate beer. We used buttons made of pure cocoa that we put into the beer before it maturated, so it would slowly develop that chocolate flavor. TAIPEI543: Were there any unexpected challenges that you faced after founding Le Ble D’Or?

YEH: We did not make a profit for seven years. Most people in business wouldn’t tolerate that. Establishing a brand identity takes a long time, so we kept working at it. We didn’t want to abandon our employees. We didn’t want to tell them “Oh, we can’t do this anymore. We made a mistake.”

TAIPEI543: What motivated you keep the business even though you didn’t turn a profit for seven years?

YEH: Like I said, we had a lot of employees to take care of. That was the main reason. Also, we didn’t want to shut down our restaurant while we were still in the process of gaining brand recognition. When you work on branding, you have to spend a lot of time and money. It’s a long-term investment. That’s my father’s philosophy. It’s important to have a good founder who isn’t just focused on making money. If the founder only thinks about turning a profit, he might just serve low quality items. We’ve always used the best ingredients and we try to figure out how to give the best things to customers. That’s how we gradually built up our reputation. Photography by Up Against the Wall Studio

cannot wait to try. perfect place for a gathering of friends, too! honey beer sounds so good right now..

awesome interview as always. i really think far too many taiwanese people are just used to taiwan beer because its the “national” beverage and is at every restaurant. a lot of folks need to get out there and try different brews, and i think Le Ble D’or entering the taiwan market was a GREAT thing. variety is fantastic, especially when it comes to beer!

There is also a restaurant in Mega City next to Banqiao station. Nice place for a pint after a 3D imax film.

It’s not just beer and food.
Lebledor is a lifestyle.

not a fan of beers but i love love the honey lager beer :D

I love American microbrews and can’t wait to try this when I get back. Brewing is a lost art and hopefully we see more in Taiwan in the future.