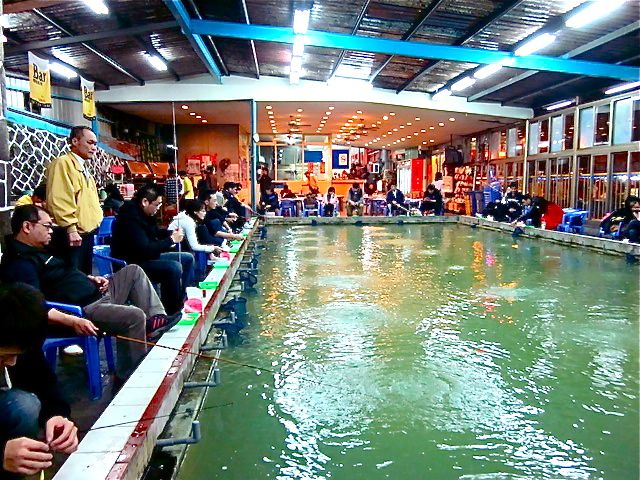 Shrimping is a popular local Taiwanese activity that’s precisely what it sounds like, fishing for shrimp! It takes place inside a big shack-like shrimp farm where you sit on plastic deck chairs while fishing from a pool filled with live shrimp. Shrimping has become a popular late-night activity for families, children, and even couples – the shrimp farms are typically open 24 hours a day. It’s definitely a fun and relaxing experience worth trying! One of the more well-known shrimping areas is located just a short cab ride away from Shilin MRT on Zhizhan Road. Here you’ll come across a row of shrimp farms offering a similar shrimping experience and price. One hour for 300NT, two hours for 500NT, or three hours for 700NT. Most people go for two hours and share a rod for every two people.

Here’s how it works. You get a tray of chicken liver and small dried shrimps to use as bait. Once your line is cast, wait until a shrimp really gets a piece of the bait before jerking it up.This is not as easy as it sounds! If you pull up too early, the shrimp will get away. The water is also deliberately murky so you can’t see where the shrimp are.

So while you wait for your shrimp to take the bait, feel free to sit back, chat with friends, and even sip on some Taiwan beer. After successfully catching some shrimp, you de-claw and rinse them clean. Next comes the gruesome part of skewering them. The poor things are still alive and squirming around at this point! Lastly, cover the skewered shrimps in a coat of salt before grilling them until they turn golden orange. Then voilà, bon appétit! How to get there:

When you arrive at shilin, it’s cheaper to take xiao 18 or xiao 19 from the bus stops in front of the watsons (straight and to the right out of exit one) and then get off at sha lun xia.