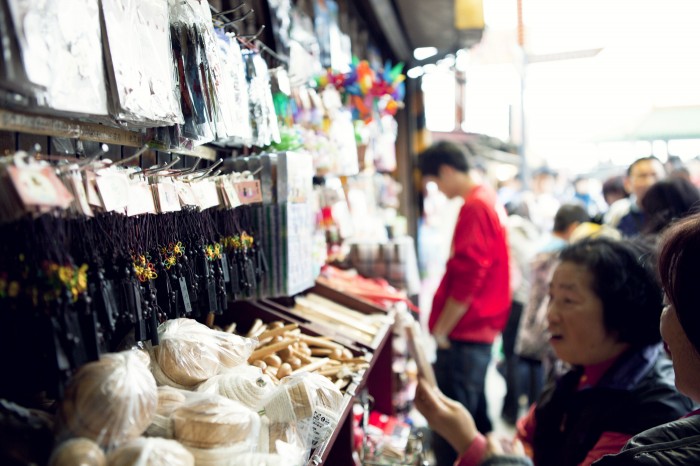 Jiufen, roughly 15 miles outside of Taipei, is just a drive away for locals and has become a popular place to escape from the rush of city life. The Taiwan543 team arrived at Jiufen late morning on a crisp Sunday, after a windy drive up. We started our adventure by foot through the vibrant Old Street, a narrow and uneven path abounding with tiny souvenir shops, food vendors, and cafés lined with red lanterns and inviting signs. Though the hike up was tight and at times, stifling due to the weekend crowds of both locals and tour groups, we took advantage of its offerings: taking quick peeks into the shops and buying snacks to nibble on like the standard grilled sausage on a stick and the more novel ice cream with peanut dust and cilantro bundled in a thin wrap. We saved enough room for fen yuan, a chewy dessert similar to mochi, and Jiufen’s staple food attraction. We climbed up to one of the more popular restaurants by the town’s elementary school, and split both cold and hot (soup) versions of the dessert, which included a mix of the yam, taro and green tea flavors. It was the perfect snack to fuel us for the rest of the day. Next, we made our way to the Gold Ecological Park, a spacious area with a small collection of historical and cultural sights and exhibits surrounded by stunning views of the rocky coastline. As we climbed higher up along the rolling green hills, we sensed we might be lost, and befriended a gentleman named Phillip who took the lead in guiding us to the park’s exhibits. On our way there, he explained to us the town’s heritage. Throughout the 1930’s (during the Japanese occupation), Jiufen was a gold-mining boomtown, and its means were used to support Japan’s WWII efforts. He also mentioned that at the time, Jiufen was used as a place for POW torture and labor camps, starkly contrasting its now peaceful state. Once at the exhibits, we learned of the mining process and the many uses of gold, and had the honor of touching the world’s largest block of gold (484 lbs.). After making a quick loop around the Crown Prince Chalet (built for the Japanese Prince in 1922), we walked around some more, soaked in the sun and picturesque views, and called it a day. After just a few hours in Jiufen, the Taiwan543 team felt enlivened, leaving in good spirits. It’s a place we highly recommend all locals and visitors experience. Though the easiest way to Jiufen is by car, using a GPS or directions from Google Maps, there are train and bus lines to the mountain town.

By train: From Taipei, take the train north to Ruifang Station. From Ruifang take the Keelung Transit bus from the bus stops in front of the train station to Jiufen. Line up across the road to go to Jiufen and Jinguashi. The bus ride is about 15 minutes. Not all buses are equipped to show the correct driving direction or have bilingual signs.

By bus: From Taipei, take the Jiufen bus no. 1062 (bus company is Keelung Bus) from the Adventist Hospital bus stop on Bade Road, east of the intersection with Fuxing Road. Alternatively, take the same bus from Songshan station or Zhongxiao Fuxing MRT station Exit #1. Cost: 102 NT$ (make sure to have the exact change or an easycard.) The journey takes a little more than 1 hour. There are great views of the valleys below on the left hand side of the bus as it ascends to Jiufen.